invasive moth in Turkey?
Wow, what a great site! I am a biology teacher and I am not even sure this is a moth!?! It is a recent addition to the eastern Black Sea region of Turkey (between Rize and Hoppa). The locals call it a ‘Kiwi moth’ because it showed up about 6 years ago – around the same time kiwi plants were brought in for production. I took pictures of the larva and the adult. The adult is about 3 cm long and 4 cm wide with transparent bands on the wings. The larva is 1 cm or so not including the ‘tail’. Thank you for any help you can give!
Kim Hitchcock 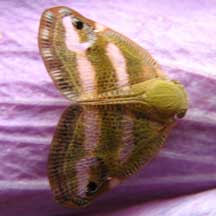 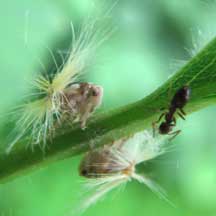 Hi Kim,
We are going to try your research skills and charge you with completing our research and arriving at a positive identification, then writing us back with the answer. This is some species of Planthopper in the family Ricaniidae. According to Wikipedia, the family Ricaniidae contains: “over 40 genera and 400 species world-wide. Thus, they are one of the smaller families in the planthopper superfamily (Fulgoroidea). The highest diversity is in tropical Africa and Asia and in Australia , with a few species occurring the Palearctic.” It is likely that the species in your photos was introduced with the Kiwi since they appeared at the same time and since the family is well represented in Australia, hence probably New Zealand, though the original Kiwi vines may have originated elsewhere. Your insect most closely (though not exactly in our minds) resembles the Passionvine Hopper, Scolypopa australis, and we have found a page with images of the Passionvine Hopper on kiwi in New Zealand. The resemblance of your insect is quite close, so we would suspect it is perhaps in the same genus. It is also possible that through isolation from the main population, the appearance of the Turkish population has already begun to change, an example of evolution in process. We also located a site of Australian Ricaniidae species with some images. A Bonsaii for Beginners webpage pictures the nymphs of the Passionvine Hopper, and they also look very close to the image you have provided. On a humorous note, the New Zealand Plant Doctor website refers to the nymphs as Fluffy Bums.