Subject: Name That Nope!
Location: Chesapeake, Virginia
May 20, 2016 2:26 pm
I found this neat little guy running around my smoker 2 days ago (May 18, 2016). I live in Chesapeake, VA. I’ve reached out to the internet via Facebook and Imgur as well as searched through a spider database i found with no matches. Suggestions were a Juvenile Orb Weaver (which we’ve had a few of over the years) or theridion grallator.
Signature: -Anthony T. 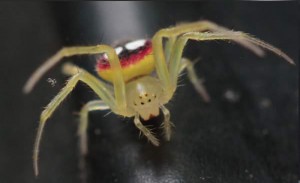 Dear Anthony,
Orbweaver is a general name for a Spider from the family Araneidae and according to BugGuide:  “There are approximately 3,500 species worldwide, with 180 occurring north of Mexico.”  But for the eerie pair of blind eyespots on your individual, we thought it resembled, especially in the true eye arrangement, Araneus alboventris pictured on BugGuide and described on BugGuide as “Carapace, sternum, legs greenish yellow. Bright yellow rings around posterior median eyes. Abdomen dorsum with black patch bordered by crimson red border on golden yellow background.”  Then on BugGuide we found a male, recognizable because of the enlarged pedipalps, the first pair of appendages that are used to transfer sperm to the female.  A comment compares this individual to Araneus alboventris.  We suspect this is a white spotted color variation of Araneus alboventris and we propose the common name Blind Eyed Orbweaver.  We love the many views you provided, including the lateral view that reveals the spinnerets. 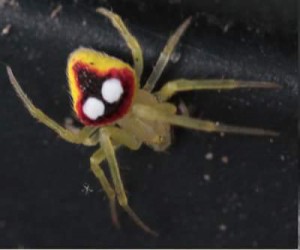 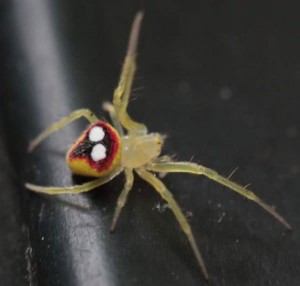 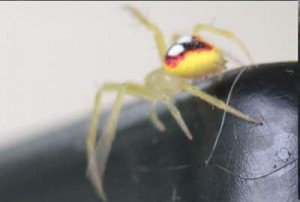 One Response to “Blind Eyed” Orbweaver from Virginia