Australian bug
Hi
These pictures are of a bug which was found in my courtyard in the Blue Mountains, Australia. It was only about 2 cm in length. I have been trying to keep a record of the different wildlife which live in my backyard, something which started last year as a school project, but have been unsuccessful in identifying this creature. Can you help? Best Wishes
Petah 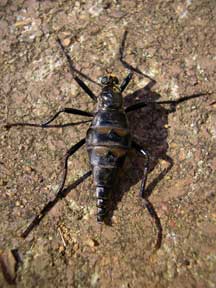 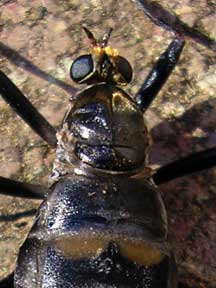 Hi Petah,
We have tried to identify this Wingless Fly, but sadly, we had no luck. We are checking if Eric Eaton has any clues. Here is Eric’s revelation: “I have no idea what the wingless fly is, but it would appear it once ‘did’ have wings, and they were torn off at some point. That is a pity, as wing venation patterns are of the greatest help in identifying flies!”

Update: (09/20/2007) forwarded through Eric Eaton
I have a second question, how to get in contact with the people from “Whats that bug”? They had a pic of a Unknown Mutilated Wingless Australian Fly (01/13/2007) Australian bug And this turns out to be a Stratiomyidae, Boreoides subulatus, the females are always wingsless and it looks not even close to something we know here in the USA as a strat. It is out of the strange subfamily Chiromyzinae and this is an only Southern continent group. Only one species is introduced to Cal as a pest… So maybe you can email the people and give them the answer to their question. Also further down they have an Acrocerid as a Bombyliidae and a suspected “Mallota” which is a Merodon equestris. Looking forward to see your book! Cheers
martin