Mexican moth
January 3, 2010
This moth was found in the morning outside our room in Cancun – the balcony light had been on all night and had attracted quite a few insects – which in turn were just beginning to be noticed by the birds.
Walter
Cancun Mexico

Hi Walter,
We are checking with Julian Donahue, an expert in the family Arctiidae, to see if he recognizes your moth.

Julian Donahue assists
It’s in the family Megalopygidae (puss caterpillars, puss moths, I believe they’re called).
You might find a name on the Internet, but I don’t have any pertinent references here at home.
Julian P. Donahue

Ed. Note
Puss Moths are also called Flannel Moths.  We tried a web search and found a page on the family Megalopygidae on the Belize Moths website, but this species is not listed.  For now, it will remain an unidentified Puss Moth.  Many moths from this family have stinging caterpillars that will result in a painful encounter is they are carelessly handled. 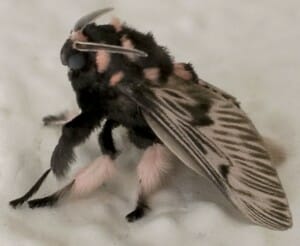 Karl to the rescue again
Hi Daniel:
I am fairly certain that the genus is Megalopyge (Megalopygidae: Megalopyginae), but it is quite a large group and it is difficult to be sure about the species. However, the lovely pinkish highlights suggest that it could be M. lanata, the Mangrove Flannel Moth (also here), which ranges from Mexico to Brazil. Most Megalopyge species appear to come in a range of color variations and although I wasn’t able to locate an easily linkable online photo that shows the same vivid black contrasts as Walter’s individual, I have seen images of M. lanata that look very similar. If it is M. lanata, then this is the third time it has appeared on WTB – the previous two being caterpillars. As with other Flannel Moths, this one earns its notoriety because of the problems it can cause as a caterpillar. I really like these photos and I believe, once again, some of the best images of a given species can be found on WTB. Regards.
Karl