Cool insect in South West Turkey
Location: South West Turkey- Kayakoy
September 25, 2011 6:49 am
Hi Bugman,
we were looking for creatures in Kayakoy in South West Turkey and found this little chap. It was about 1-1.5 cm long and was found in ground level vegetation among the ruins of the village. Superb camouflage.
Hope you can help.
Thanks for your time
Signature: Andy 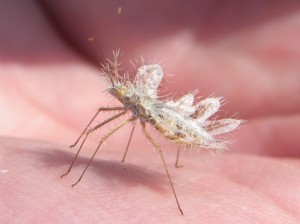 Dear Andy,
We are a bit puzzled by this creature’s identity and we need additional time for research.  Our first thought is that it must be a Hemipteran, but the clubbed antennae gives us a strong reason to doubt.  The wings indicate that this is an adult.  We will continue to research this after posting and we hope to get some additional opinions.

Ed. Note
Once we received the comment, we did a bit of research, and confirmed on BioLib that Phyllomorpha liciniata is the correct identification, and also that it is in the family Coreidae, the Leaf Footed Bugs.  Images can also be found on Israel Insect World  with information in Hebrew and Gallerie Insecte with information in French.  We also learned on Evolutionary Population Biology that the female lays her eggs on the back of the male.  Behavioral Ecology also contains research on the shared parenting for Phyllomorpha liciniata which is called the Golden Egg Bug.  The Consejo Superior de Investigaciones Cientificas (CSIC) (Spanish National Research Council) has one of the most thorough papers posted on this species and its unique mating habits.  The study by Montserrat Gomendio and Piedad Reguera begins with this information:  “Female golden egg bugs follow a flexible oviposition strategy because they lay eggs on other conspecifics (male and female) and on the host plant (Paronychia argentea). In natural populations a much higher proportion of males than females carry eggs and, among egg carrying adults, males carry more eggs than do females (see below). Females cannot lay eggs on themselves, so egg carrying females are always carrying other females’ eggs. It is less clear whether males carry their own offspring, other males’ offspring, or a combination of both. This has generated a controversy about whether egg carrying by males is a form of parental care, a case of intra-specific parasitism, or a combination of both.”

2 Responses to Unknown Insect from Turkey is Golden Egg Bug