Can you identify this green bug?
Location: Palakkad, Kerala, India
January 16, 2011 11:38 am
I spotted this bug on an Otaheite gooseberry. Green, shiny, metallic. Didn’t see it flying.
Signature: Abhishek 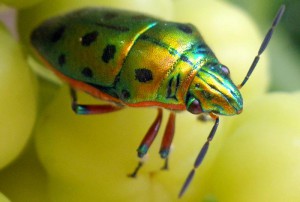 Dear Abhishek,
Shieldback Bugs in the family Scutellaridae are often called Jewel Bugs when they are as brilliantly colored as your specimen.  Once, back in 2007, we posted a similarly colored, but morphologically different Jewel Bug from India that we never properly identified.  We also have a photo of a Lychee Shield Bug from India we posted last year that looks very similar.  PestNet has another similar looking Jewel Bug from Malaysia that is identified as Calidea dregei.  We found a blog called Lifescapes Gallery that indicates that Jewel Bugs are known as “ponvandu” in India and states:  “these dazzlers were prized finds for entire generations of children whose stock rose or dipped with the extent of their bug collection, and thus were guarded zealously.”  The internet is full of similar looking Jewel Bugs, but we could not substantiate any exact species name.  Additionally, many are incorrectly identified as beetles. 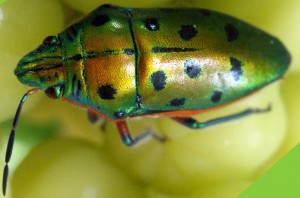 Probably Giant Silkmoth Caterpillars in the genus Arsenura from Brazil