Big Headed Fly, we believe SOUND THE SIREN: Our 15,000th posting is the Police Car Moth

Subject: Yellow moth from BC
Location: Port Coquitlam, BC, Ca
July 24, 2012 12:06 am
This beauty was in the house hanging from my hat a few Julys ago. You’d think identifying a bright yellow moth with a cute pointy nose would be a cinch, but that hasn’t been the case. Any ideas?
Signature: Storm 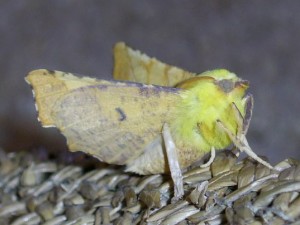 Hi Storm,
We did a quick fruitless search, but our problem is we don’t know where to begin, and our two first choices are both big categories.  The wing shape and position makes us think this is a member of the family Geometridae, but the stout body and other features seem more like Noctuidae.  We will contact Julian Donahue to see if he has any ideas.

Julian contacts some experts
Jon and Gary,
Which of you can be the first to come up with a name for this beast from B.C.?
ID is being requested from the What’s That Bug? website, so any additional comments you can provide on hostplants, distribution, seasonal occurrence, etc. will be informative, and most likely will be posted with attribution.
Many thanks. (And if you’re at the Denver meeting I’ll understand a delay in responding),
Julian

Many thanks, Gary.
Looks pretty good to me, and compares favorably with pics on MPG:
http://mothphotographersgroup.msstate.edu/species.php?hodges=6797
Daniel: Common name is Maple Spanworm Moth. Map and other images at link above.
Guess you win the lollypop, Gary.
Best,
Julian

Thanks Gary and Julian.

Daniel,
Thank you (and your network!) for identifying my house guest. Following the Moth Photographers link, I found this on the next page. What do you think?
cheers, Storm

Hi again Storm,
The common name Canary Shouldered Thorn Moth seems more fitting based on your photos.  Both moths are in the same genus and they look similar.  Often exact species identification is impossible based on photos, especially when variation is possible and species look similar.  We will send your latest query back to Julian and Gary.

Gary Anweiler confirms
Absolutely !!!  I was unaware of a second species of Ennomos out there.  So I learned something too.  I will take 2% of the credit, as getting to Ennomos led to finding the correct one; but I will be returning the lollipop!
Gary

Jon Shepard chimes in
July 28, 2012
Julian and Gary
I was in the field when these emails came. I agree with Gary with the following problem.
I do not have any vouchers of this species.  Photos on the CNC website and in the Geo’s of Scandinavia do not show as many darker lines on the upper forewing.  Those photo’s show only two lines.  Inoue’s Moths of Japan show no other matches.
Jon
Hi again
The comments I just sent to Gary and Julian applied to E. alniaria, not E. magnaria.
Jon

Thanks Jon,
I am Daniel Marlos from What’s That Bug? a pop culture insect identification website.  I have no scientific background, so please excuse me if I ask for a bit of clarification.  According to my understanding of your comment, it seems you are favoring Ennomos magnaria as the proper identification.  Can you please confirm.
Thanks again for your expert input.
Daniel

Daniel
I think it is E. ainiaria.  My earlier comments, which you did not receive, referred to the upper forewing pattern.  The photo you sent seems to have a more patterned surface than any other photo I found of E. alniaria.
Could you send me the locality information and date that the photograph was take and the name of the person who took the photograph.
So far this species is only known from the SW coast of BC and one interior location [Moth photographers group-unverified].
Jon Shepard
This is an introduced species

Storm provides some historical data
July 28, 2012
hi Daniel,
I’d be happy to provide what ever information I can for Jon. He’s right about it being unusual: The Moth Photographers Group page on this moth says it was introduced in/around 2006 to two areas of BC. The photos on their page were taken in Burnaby, BC, which is right next door to me.
BTW, the embedded date (2005) on my photos is wrong – that particular camera would reset the date whenever the batteries died. The actual date (2007) is given as the name of the photo.
Thank you again for your help. I’ve tried to figure this out for a long time and got nowhere until you started asking questions!
cheers, Storm

One Response to Canary Shouldered Thorn Moth from Canada