Minuscule Rove Beetles(?) in Oklahoma!!!
March 5, 2010
Hi,
Today I found these tiny beetles in my pool (in central Ok.). I think that they were rove beetles, but I’m not sure. They were both about 2mm in length, with long, thin abdomens. One had a head that definitely looked like a rove beetles, but the other had a more rounded head with smaller eyes. Their elytra did not cover their abdomens and they would both periodically retract their wings. One was black and the other was dark brown. Since I found them in my pool I don’t know what kind of habitat they would normally be living in. Thanks for any help you can provide in identifying these little guys.
Josh Kouri 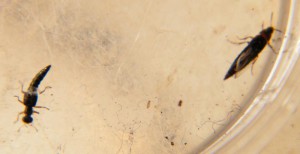 Update
March 8, 2010
Hi,
Several days ago I sent you some pictures of rove beetles that I found. After I sent you the pictures I decided to check BugGuide and I think I might have Identified them myself. I think that the black one with the more rove beetle-like head is a species of water skater. The other one looks like a crab-like rove beetle, possibly /Byroporus rufescens. /I’m not sure that those I.D.s are correct, but they are my best guess. Thanks,
Josh 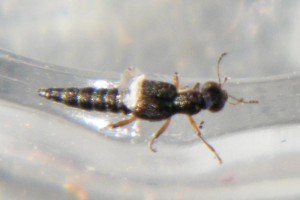 Hi Josh,
Sorry we did not respond to your original letter, but we have been very busy, and the quantity of mail and identification requests is beginning to increase with the approach of spring.  Thank you for taking the time to research the identities on your own.  We know that searching through the incredibly well organized archives of BugGuide can be a daunting task.  We agree that based on images posted to BugGuide, one of your Rove Beetles is a Water Skater.  The images on BugGuide of the Crablike Rove Beetle Byroporus rufescens also resembles your photograph.  We concur with the identifications you have made, at least to the family level. 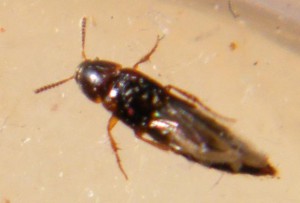 Announcing a New Tag: The Big 5