Booklice in Indonesia Mantisfly from Australia

Large red ant This time, with photo!
Hi
I found this ant crawling through my hallway and have tried unsuccessfully to identify it. Can you help? It is about 1/2 inch long. I thought it might be some type of carpenter ant; they are pretty common around here. This little guy has a very distinctive white stripe around his abdomen, though, and I couldn’t find anything similar in my bug books or online. Thank you!
Mandy
Cedar Hill, TX
p.s.: Sorry, I forgot to attach the photo the first time 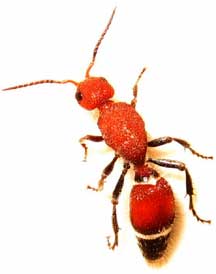 Hi Mandy,
Though it looks like an ant, and is called a Velvet Ant, your insect is a flightless female wasp. Be careful, as she can deliver a very painful sting.

(12/08/2007) Large red ant
I’m sorry, but I don’t think so. I know what velvet ants look like, I have had them in my yard. (see attached photo) I know they are actually wingless wasps. They are much bigger, and much hairier than this bug. This guy is large for an ant, but only 1/2 inch. I know it looks large in the picture, but I had a hard time putting something next it for size contrast since it wouldn’t be still.
Mandy 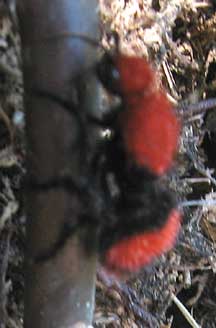 Hi again Mandy,
We gave you a very general answer. Velvet Ants are a family of wasps, the females of which are generally brightly colored and flightless. The family is Mutillidae. Your original image might be in the genus Timulla, or the genus Pseudomethoca, or perhaps some other genus. We are not sure of the species. Your second photo is also a Velvet Ant, and this one is in the genus Dasymutilla. It appears to be a Cow Killer, Dasymutilla occidentalis, but the photo is too blurry to be certain. So both of your images are of Velvet Ants, but they are different species.