cats?
Hi Bugman,
I just found your site and I LOVE IT!! Went through your 12 pages of caterpillars trying to identify these three specimens photographed on the high plains of Wyoming. The reddish one seems to be an Echo moth (Seirarctia echo) and the blue one most closely resembles a Tetrio sphinx moth. I know of global warming but both are neotropical, how did they get in Wyoming…hitch- hike?? Red cat photographed 7/5/07 in badlands near Douglas, WY; pasture nearby, cottonwood trees 1/2 mile away. Blue cat photographed 9/28/05 north of Lance Creek, WY; sagebrush pasture, a few juniper within 1/2 mile. The black cat was photographed 6/12/07 on young sagebrush in a high plains pasture of northern Natrona county, no trees within miles. Any help with definite identifications will be most gratefully received.
Dwaine Wagoner
Casper, WY

Hi Dwaine,
We have identified your black caterpillar first. This is a Buck Moth in the genus Hemileuca. It might be the Hera Buckmoth, Hemileuca hera, which has been reported from Wyoming. It does feed on sage. If this identification is not correct (the Butterflies and Moths of North America does not have a caterpillar image but the one on BugGuide looks very similar, though not exact), it might also be Nuttall’s Sheepmoth, Hemileuca nuttalli, another western species listed in Wyoming that feeds on sage. There is only an adult moth image on the Butterflies and Moths of North America. 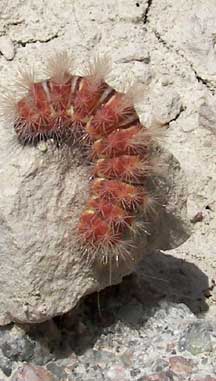 We agree that your red caterpillar is probably an Arctiid, though not the Echo Moth. We have not had any luck identifying it but we will try to contact Julian Donahue to see if he recognizes it.

Correction (11/18/2007)
Sorry. My guess would be a hemileucine saturniid. Check out Paul Tuskes book on the Saturniidae of North America, which I think illustrates all the larvae. Julian

Finally, we do not believe your blue specimen is a caterpillar. We think it might be a Sawfly Larva, though we cannot match it on BugGuide. Eric Eaton is not currently available, but we will email him and hope he gets back to us next week. If we are wrong about this being a Sawfly, it might be some beetle grub.

Update: (11/26/2007)
Hi, Daniel:
I ‘think’ it is a caterpillar, but I’ve not seen anything like it before. It is not a sawfly, and I’m relatively confident it is not a beetle grub, as most beetle larvae are not that colorful.
Eric