Subject: Crawling Orange and Black insect on Forest floor
Location: Tioman Island, Malaysia
August 8, 2012 3:38 pm
I have been trying to figure out what this thing is for close to 6 months now.
Its got a tiny head, a wide flat black body at the front with orange/red tips and then the segments get smaller after the first 3. Its legs are tucked in toward the center line of the body.
Found it hiking on the island of Tioman in Malaysia
heres a link
http://www.google.com/imgres?q=orange+and+black+insect+in+malaysia&um=1&hl=en&safe=active&sa=N&biw=1280&bih=883&tbm=isch&tbnid=11PTftjVu61mVM:&imgrefurl=http://flickrhivemind.net/Tags/trilobitebeetle/Interesting&docid=WNsTjBRt9WqrUM&imgurl=http://farm1.static.flickr.com/208/449128409_3e6ea2c4fa.jpg&w=334&h=500&ei=CM0iUOLtBeitiAKbzIGICw&zoom=1
couldnt find a smaller link.
Signature: Brandon 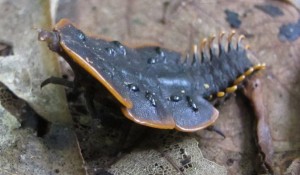 Hi Brandon,
This unusual creature is known as a Trilobite Beetle, Duliticola hoiseni, and we first posted an image of this interesting beetle back in 2006.  At that time Eric Eaton wrote in: “The firefly larva from Thailand is actually an ADULT female Demosis species of net-winged beetle (family Lycidae). They are known commonly as trilobite beetles.”  There is now more information online for this fascinating creature, including these great images on Animals, Animals, Animals.  There is a wealth of information but no images on Animal Diversity Web, including this physical description:  “Duliticola hoiseni is an exceedingly segmented creature with a very small head that retracts into the prothorax. The prothorax is a triangular segment that has two small tubercles protruding from the front of the segment near the area where the head extends. Two larger tubercles are near the back of the prothorax segment. The extendable head of the trilobite beetle has very small eyes which sit behind two-jointed antennae. The segment behind the prothorax, the mesothorax, is much wider than the first segment, with four large tear-drop shaped tubercles situated in the middle and a pair of smaller ones near the rear. The next segment, the metathorax, is much like the mesothorax, with the addition of a straight, swept back posterior edge. The nine-segmented abdomen is covered in cylindrical abdominal processes, which originate from the rear of each segment and angle back and upwards. Mature females are yellowish-white, whereas the males and immature females are generally a dark brown color with cinnamon colored processes. The average size of this insect is between 35 mm and 45 mm. (Lok, 2008)”