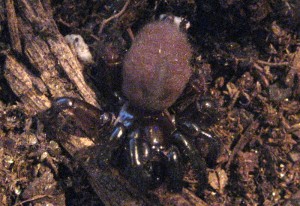 Subject: Unidentified Kentucky Spider
Location: Louisville, Kentucky.
October 12, 2014 6:25 pm
A friend and I found a spider that we can’t identify, we’ve lived in Louisville all our lives and are outdoorsman and we’ve never seen any spider like it before. It looks a lot bulkier than anything we’ve had around here, almost like a small tarantula but we can’t find anything similar to it anywhere online. We were thinking maybe someone let a bunch of infant tarantula’s loose from a pregnant pet after they hatched and we found one.
Signature: Regards, Stephen.

Hi Stephen,
We wish your image had more detail, because though we believe we have correctly identified your spider as a Trapdoor Spider in the genus Antrodiaetus, we are not entirely certain.  Your individual looks very much like this individual posted to BugGuide that was found in Pennsylvania.  Along with Tarantulas, Trapdoor Spiders are classified in the Infraorder Mygalomorphae, the most primitive group of spiders.  Another, less likely possibility is a female Southern House Spider, also pictured on BugGuide,  which BugGuide describes as:  “Females are frequently mistaken for small tarantulas or trapdoor spiders. Males are often mistaken for recluse spiders (Loxosceles). This is a totally harmless species that builds “messy” webs emanating from crevices, often on the outside of homes.”