Shiny black spider with a fuzzy brown abdomen
Location: Redmond, WA
September 19, 2011 1:45 am
Dear Bugman,
I was alarmed to discover a spider on the wall right next to me. I’m generally happy to see my arachnid housemates–the long-legged web weavers that hunt ants, move nice and slow, and stay put beneath the sink, but this one was downright scary looking by comparison and moved real fast. (It’s about the size of a nickel.) I took a couple pictures, went to adjust the zoom, then looked back and it was gone.
My usual policy is to squish things that might be dangerous and I can’t avoid when I can, before they hide under something. (Especially since I live in a studio–it disappeared about eight feet away from my bed, and right next to my dresser.) But since this spider has found a momentary reprieve, just how dangerous is it? Is it safe for me to capture and put outside, or even safe enough to leave alone altogether?
I’ll feel a lot better either not squishing something unnecessarily, or knowing that it was honest self defense. Thanks!
Signature: Tim 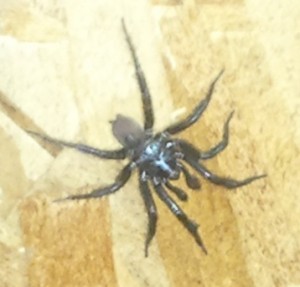 Hi Tim,
We wish your photo had better detail, because we believe this is a Trapdoor Spider, and it really resembles the California Trapdoor Spider, Bothriocyrtum californicum.  While insects and spiders do not have any respect for state or country borders, they do have habitat restrictions that limit their ranges.  We have only ever received reports of California Trapdoor Spiders from California, and all the sightings on BugGuide are also from California.  This is not an aggressive species and they are not considered dangerous, however, BugGuide recently added this bit of trivia to the sorely lacking in information info page:  “According to Guinness World Records, as of 2009, this is the strongest spider. It has been able to resist a force 38 times its own weight when defending its trapdoor. This equates to a man trying to hold a door closed while it is being pulled on the other side by a small jet plane!(1) Unfortunately, the Guinness book doesn’t mention if it’s the strongest North American spider or if it’s the strongest in the world. Also, one thing to think about is whether or not every spider’s strength has been measured. I guess one can safely say that the information is flawed in that aspect, but it still asserts the fact that these spiders ARE very strong.”