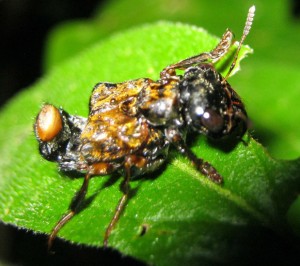 Hi Laurence,
We are positively thrilled to have received your photo of a Transvestite Rove Beetle, Leistotrophus versicolor.  We originally received a similar identification request from Costa Rica last September, and you can read that entertaining posting here.   Here is what Scrubmuncher’s Blog has to say about the Transvestite Rove Beetle:  “Interestingly, there are even transvestite insects and the males of one of these species, a rove beetle from Central America, subtly imitate females as a means of getting access to and reproducing with bone-fide females. The transvestite rove beetle (Leistotrophus versicolor) is a denizen of the rain-forests of Costa Rica, where, like lots of other rove beetles, it makes a living by seeking out decaying plant and animal matter to feed on the adult insects and larvae that make use of these ephemeral resources. These honey-pots don’t last long in the super-charged biological activity of the hot and humid tropical forests, so when normal male rove beetles find them they guard them because they also attract females, allowing a male to assemble a harem.  Males of this rove beetle are divided into two types, normal butch specimens and small, effeminate ones. The small, effeminate males can find honey-pots, but they have little hope of defending them against the bigger males, so their chances of building a harem are next to nothing. These males have evolved another means of making sure they pass their genes onto the next generation. They sneak past the normal males using their effeminate appearance as a disguise and under the harem owner’s nose they have it away with the females he has been so carefully guarding. This strategy is almost flawless, but now and again the transvestite male is caught prancing around in the harem by the owner male and the only way he can avoid being torn limb from limb is by assuring the aggressor of his femininity and giving in to a ‘mating’.  One sore behind later, the transvestite male carries on sneakily copulating with the females in the harem, only slightly more nervous for his unpleasant experience.  The duplicity of these beetles is not just limited to transvestism, as they can also produce odours that mimic the smell the rotting matter in order to attract prey, namely flies. The rotting matter these beetles depend on can often be hard to come by, so they need an alternative means of finding suitable prey. Within the tip of their abdomen these beetles have a pair of pygidial glands that can be popped out to smear an odorous secretion on a suitable platform, such as a leaf. Flies are drawn to this odour in the hope of finding some filth to feed on to lay their eggs on, so all the beetle has to do is to wait until a suitable victim scuttles within pouncing distance.”  There are some nice matching photos on the American Insects website.  Should you desire additional information, you can read about the “Post-copulatory aggression toward their mates by males of the rove beetle Leistotrophus versicolor (Coleoptera:  Staphylinidae)” in the online version of the Behavioral Ecology and Sociobiology.

Update:  August 20, 2011
Hi Daniel
Thanks very much for your response. I didn’t expect anything so detailed or interesting!
I don’t suppose you can say whether it’s a butch male or effeminate male / female?
Cheers
Laurence

We aren’t sure about the sexual traits of the Rove Beetle.  Sorry.

One Response to Transvestite Rove Beetle