Subject: Mystery Insect Captured during a nature walk in Amazonian Ecuador
Location: Cuyabeno National Park, Sucumbios, Ecuador
September 5, 2015 4:15 pm
Greetings bug-men and -women!
My name is Josh and my home is San Diego, California. Working in a pharmaceutical lab during the week, I always enjoyed indulging in the inkling in the state parks around where I live to get out and see the flora and fauna. Although I haven’t traveled much most of my life, this summer my friends were able to persuade me to go with them to Ecuador in order to tour its Amazonian and Andean reaches! Although the diversity was expected, nevertheless I was stunned by the simply unhinged assortment of birds, monkeys, and especially insects. Harboring only a very amateur level of knowledge of some scientific classifications, I was able to do research and figure out each of the insects seen on the voyage, except for one!!! The insect (or possibly even a mollusk?) I would like to present really threw me for a loop. My tour group was on its way on foot to a Siona community about longitudinally midway in the Cuyabeno National Park in Ecuador. I was falling behind the tour, so I was onl y able to snap 1 quick photo of the little guy. Anyhow after some exhaustive searches upon my return home my findings were inconclusive. If you ever find the time to take a look at it, I’d love to know what this peculiar guy was. Then I’ll be able to revise my current slang name for it, the 1934 Tatra 77, of which it bears remarkable resemblance. 😉
Signature: Sincerely, Josh 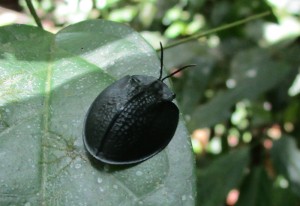 Dear Josh,
This is most definitely a Tortoise Beetle in the Leaf Beetle tribe Cassidini.  We found a matching image on Getty Images, but it is not identified to the species level.  Similar looking images on FlickR and again on FlickR are not identified more specifically.  At this time, the best we can do is the general identification.