Photos of Burying Beetle with Mites
Hey there,
I’m from Nova Scotia and took a couple of photos of this burrying beetle back in late August on the Eastern Shore in Jeddore. I wasn’t sure what it was at the time (looked like an unusual bee to me) but did recognize that it seemed odd and worth photographing. I posted these photos on a local message board this evening asking if anyone happened to see this insect before and someone came back with a link to your site saying they thought it resembled the Burying Beetle. After a quick look myself, I concured. I was also told that apparently, they’re rare in this region. Thought you might appreciate the photos for your site. Sincerely,
Elizabeth Gaudreau, Nova Scotia 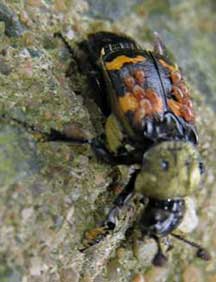 Hi Elizabeth,
The beetle is a Tomentose Burying Beetle, Nicrophorus tomentosus, and the Mites are hitching a ride to a new food source, a phenomenon known as Phoresy. The Mites feed on fly eggs and maggots, and as flies are competitors for carrion, having the mites feeding on the maggots is beneficial to the young Burying Beetles as it leaves more food for them.