Hi bug man!
My name is Stephanie, and I live in a suburban neighborhood in Birmingham, Alabama. I have a question about a bug that I have noticed sitting at my front door every night for the past week. It only comes out at night, and boy is it hideous looking. For starters, this thing is huge. It appears to be black on its back, yet when turned over, seems to have a lighter-colored abdomen. Also, to make it even uglier, it has two long siphon-like extensions that come out of its (i guess) “head,” and these appear to be a color similar to its (?) abdomen. I have not yet been able to approach it, for I have a fear of strange insects (and some not-so-strange ones!)…so my details are few. It apparently likes our porch light, for, as I’ve said, it only comes out at night. A few nights ago, my fiance drove me home so he could take a look at it. He attempted to kill it, spraying it with Raid. It got very upset and flew all around my front porch, banging into the door and anything in its path. (sidenote: when it hit the door, it made a very “hard” sound, as if it were a rock) After about 5 minutes, it stopped flying around and landed by our front door mat, appearing to be dead. Wanting to investigate exactly what this strange bug was, I told my fiance not to pick it up and said that I would take a look at it the next day, when it would be light outside. So, the next day, I went down….and no bug. I assumed that possibly another animal of some sort had taken it and had it for supper, and that was that. Yet, tonight, again, as I returned home at around 1am, it was back in the EXACT same place that it had been the past 5 nights. I am so terrified of it, that I will not enter my parents’ house through the front door as long as this thing is there, guarding the door….so I go around to the back (where it’s dark) and enter there! If you could, please, please, please, tell me any information that you might have regarding what the heck this nasty-looking thing is. Thanks a bunch,
Stephanie
Dear Stephanie,
You have written such an amazing letter, I only hope I can help you. The siphon, as well the habit of being attracted to lights leads me to think it might be a Giant Water Bug, Lethocerus americanus, sometimes called an Electric Light Bug. We have been getting several letters about them, especially from the South. They have a common name, “Toe Biters” due to their habit of biting the toes of swimmers. They are aquatic, and equally at home in the air or water. Here is a photo: 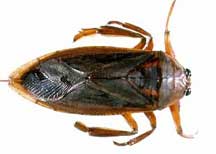