What is happening with the Titan Sphinx?
What is happening with the Titan Sphinx?
I am submitting this as a follow-up to Gary D. Taylor’s wonderful posting of a Titan Sphinx (Aellopos titan) on September 19. I will try not to repeat too much of what I submitted as a comment to that posting (a great new feature on your site, by the way). The Titan Sphinx is considered a tropical species with a normal range extending from northern Argentina to the US Gulf states. Beyond that there are scattered reports of strays in many of the eastern states and southern portions of eastern Canada. I had the great good fortune of seeing this individual in early August of this year in the extreme southeast corner of Manitoba, probably quite close to Garry’s siting. It turns out it has been reported from Manitoba only once before, and that was sometime pre-1925! It makes me wonder, is the species becoming more common up here? Was this just an exceptional year with a few individuals straying northward on a strong south wind? Was it the same individual (pretty unlikely, but an interesting thought)? It would be very interesting to know what other sitings there were this year, and I will definitely be looking for it again next year. Regards.
Karl
Winnipeg, Canada 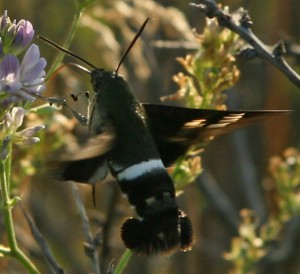 Hi Karl,
Thanks for your letter and photo as well as the comment on the previous unusual Titan Sphinx sighting. We are thrilled to break this news to the entomological world. Here at What’s That Bug? we feel compelled to wax on the possibilities of these two unusual sightings. Global Warming perhaps? Transport by Hurricane Ike maybe? Could not some Titan Sphinxes have been picked up by Ike in the Caribbean and ridden the storm north in the relatively calm eye? We will be copying Bill Oehlke on this reply since he has compiled extensive species distribution data on the Sphingidae on his wonderful website. He may request permission to post your photo.

Poplar Hawkmoth from the UK