Thistle Mantis from the Canary Islands

Subject: Unknown mantis
Location: Fuerteventura
December 20, 2015 12:43 pm
At around 6pm on December 15 2015 in a coastal town called Tuineje in Fuerteventura, me and my boyfriend walked out to the end of a concrete pier to watch the sun set. On a concrete wall we found this beautiful green and white mantis. It stayed there for the half an hour we were there and its only movement was to turn its head and it occasionally began to shake for a few seconds. It seemed very out of place on a pier out in the sea and it was almost as if it was there to watch the sunset! It was probably around 10 cm and had a beautiful ornate pattern of green and white on its back. I was wondering if you could tell me what type of mantis it is as Google doesn’t seem to be able to give a specific name. Thank you very much!
Signature: Louise 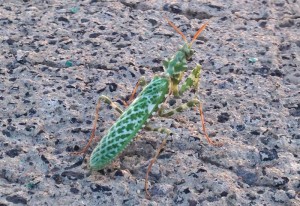 Dear Louise,
We have identified your mantis as a Thistle Mantis or Devil’s Flower Mantis, Blepharopsis mendica, thanks to the Wildlife and Birding Destinations site where it states “It is found in north Africa, the Canary Islands, the southern Med and the Middle East.”  You can also read about the Thistle Mantis on the Keeping Insects website where it states:  “Blepharopsis mendica is a quiet species of praying mantis. They are good at catching flying insects. Relying on its camouflage it waits patiently until an unsuspecting prey comes along. This species is not very aggressive and can be intimidate by large prey. Blepharopsis mendica can show a deimatic display in which it will raise its wings and hold its forearms in a sideways way. In this posture the mantis looks very big and the bright colors on the inside of the forearms is visible. This is meant to scare away predators.” 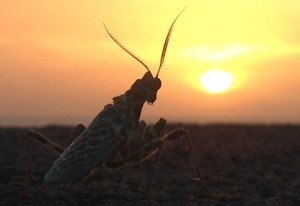 4 Responses to Thistle Mantis from the Canary Islands