Things to do in the Aquarium in August

The Aquarium Update
July 28, 2011
Sixteen of Lefty and Digitalis’ most beautiful children, 12 silver and black and 4 gold, are living happily in the 40 gallon tall aquarium with a small plecostomus.  They are gorgeous fledgelings and I expect they may begin to pair off in the near future. 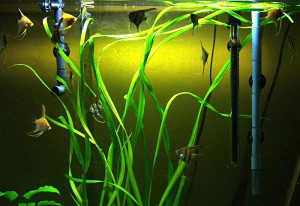 They may get a new roommate.  Boris has become a bully.  I may need to split up him and Medea Luna.  She nips his tail and he bites her pectoral fins.  Boris is a biter.  Look what he did to poor Lefty 2 1/2 years ago.  Adding Medea Luna to this aquarium might not be a good idea.  That might upset a balanced aquarium.  Perhaps one day I should just move her and a new clutch of eggs to the window aquarium.  But what about the plecostomus?  Such decisions. 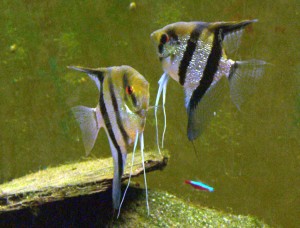 Boris (left) and Medea Luna and an old Cardinal Tetra

Boris has also gotten considerably larger than Medea Luna.  He has become a bull Cichlid.
The stories of Boris and Medea Luna’s two recent broods will continue tomorrow.
I moved 5 fry from the bathroom nursery aquarium to the new grow out aquarium near the window.  Then I moved 8 more.  I keep trying to catch the biggest fry.

Update:  Next morning
July 29, 2011
I have six more fry acclimating for transfer.  Any doubts I had about the 2 1/2 inch Plecostomus eating the fry seem to be dispelled by this Aquarium Forum posting.  There are so many places to hide in the new grow out aquarium.  I only saw 11 of the 13 fry this morning.

July 30, 2011
I moved 11 more fry today and I noticed one got trapped in the filter intake.  I reduced the filter flow to keep that from happening again.  Since I had moved the largest fry from the nursery aquarium, I decided to move the second batch of fry, just about a week old, into the nursery aquarium with their older siblings.  At around 1 week of age, I tend to have a significant die off of the weakest of the fry, and the same happened today, with the weaklings being picked on by their older siblings.

Update:  August 8, 2011
I know I moved 16 more fry today.  If I did not lose count, I have moved at least 46 fry.  When I moved the younger fry into the nursery aquarium with their older siblings, I had a major die off, probably losing almost the entire second batch.  Boris and Medea Luna laid more eggs the other day and they hatched last night.  They are guarding their new fry and I will give it a few days before removing them.  I would really like to get all the fry out of the nursery aquarium this time.

Update:  August 11, 2011
After the fiasco of losing so many fry by combining generations, I made sure to empty the entire nursery aquarium of fry, transfering them to the growout aquarium this afternoon.  There were at least 33 of the smallest fry, but they are all now too large to be severely compromised by their larger siblings.  Previously, over the past few days, I moved 11 other fry.  That would make close to 90 growing fry in the growout aquarium.  Then I removed the newest wrigglers as Boris and Medea Luna attacked the turkey baster.  I should consider moving the couple back to their original aquarium and then moving the fledgelings into the community aquarium.  Then Boris and Medea Luna will be able to raise a family without fear of predation by the tetras.  That is just a thought.  The wrigglers are now in a small container with aeration that is floating in the nursery aquarium.  The now empty nursery aquarium, except for one large snail, is awaiting their arrival.