crazy!
While taking care of my flowers in my landscaping, I spotted a creature about 1 inch from my hand-scared me to death because I thought it was a snake. I realized it was only about 3-4 inches long. It also has this thorn thing sticking out of the lower end of its body. The next day, I saw another weird creature in my landscaping and grabbed my camera. I did not think that it was the same type of creature because the first had a head just like a snake but this creature has a long snout. After watching it and taking several pictures, I pushed it along with a wire piece and it decreased in size and then looked just like the creature I thought was a snake. What is this thing??? OK, I found it….I feel very silly, but the first one I saw was brown. I am sending my pictures anyways……
Monica Lain 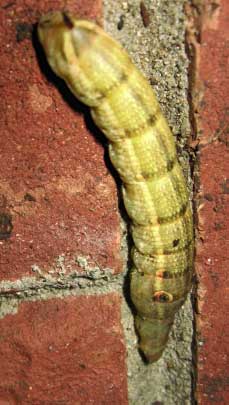 Hi Monica,
Many caterpillars, your Tersa Sphinx Caterpillar included, have markings that resemble eyes. This is a protection against birds and other predators who might be startled by a “snake”.