Subject: Looks like an Ant???
Location: Deatsville, Alabama
April 28, 2017 1:24 pm
Found these crawling around on tile by our sliding glass door. I looked at them under a jewelers loupe. The antennae appear “beaded” and it looks like one of them may have had wings. They kind of look like ants but they kind of don’t. We tried googling what these were but came up empty. My husband picked them up with a piece of scotch tape. Both pictures are the “same” but one you can see a little more clearly. I hope you can help.
Signature: Sandy 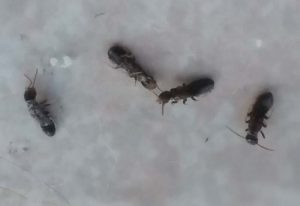 Dear Sandy,
You did not indicate if this was an indoor or an outdoor sighting.  If they were found on the tile inside the house, you might want to consult with an expert since these are Termites.  Termites often make themselves known when they swarm, and an indoor swarm will cause attention.  Swarming Termites are reproductive alates, winged fertile males and females that mate and shed their wings when starting a new colony.

Hi Daniel,
The insects were actually found inside the house right by my sliding glass door. We have not found any more beyond the few we collected and submitted to you for identification. I’m thinking they probably got in the house when I opened the door. Since you said they were termites we are being very careful when we go in and out to not allow any more into the house and if they do get in they will be disposed of immediately.
Thank you for answering what that bug was!!
Sandy

Hi Again Sandy,
If they were found indoors, our suspicion is that they originated indoors.  It is possible you have a Termite “situation” and that they swarmed indoors, seeking the light of the doorway as a possible egress.

Hi Daniel
I will call our pest control company on Monday and !et them know and ask them to come out and check our house. We get annual inspection but they don’t/won’t treat around our house. Maybe now that we have seen termites inside they will finally come treat!
Thanks again
Sandy

Hi Sandy,
If you just rent, you might want to sit tight because it will probably be years before there is any significant damage.

Hi Daniel,
We actually own our home. We use a company our builder used when the house was built. The concrete slab was treated before the house was framed, and I believe the soil was trenched once the construction was completed. The company is Arrow Pest Control. That company may be local to Alabama, I am not sure. I have asked them to come retreat/trench around the house since we built the house 17 years ago but they say they only come to inspect the house once a year, they won’t retreat. I will call them on monday and ask them to treat and if I can’t get them to come, well, they aren’t the only folks in town who run  a pest control service ;).
Thanks again for your insight and help, I truly appreciate it!
Sandy

One Response to Termites