Subject: Eww…
Location: Philadelphia, Pa
January 3, 2017 6:09 pm
So we recently moved into a new house and after clearing up a drainfly issue, we started finding these guys. At first I thought they were worms but then I found them on the walls and by my sink, too far for most to crawl. They are kinda gross and I am having a hard time figuring out what they are.
Thanks in advance!!
Signature: New homeowner 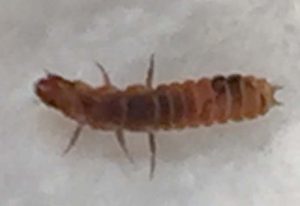 Dear New Homeowner,
Though your image lacks critical detail, in our opinion, this appears to be a Termite, which is consistent with your sighting location on walls and near the sink.  Wood found near plumbing in older homes can often become infested with Termites because of the damp conditions and leaks that might cause wood to rot.  You should probably have a professional investigate for potential infestations.  See images on BugGuide here and here to support our identification.

Cesar Crash Comments.
Hi, Cesar Crash here, I’m using other e-mail.
This guy, I’m quite sure it isn’t a termite.
I suppose it’s a beetle larvae, morfologicaly, it resembles this:  http://bugguide.net/node/view/501532
Cesar.
Sorry, I didn’t say, I’m blocked from commenting again, I recieve an anti-spam message.

Thanks for the comment Cesar.  We will check into your inability to submit comments.  There was just some work done on the site and that might have resulted in your problems.  We also thought this might be a beetle larva, but discounted the look of the legs as relating to the poor quality of the image.

Karl also believes this is a Beetle Larva
Hello Daniel and New Homeowner:
You are right Daniel, the image is unfortunately short on detail. However, I am not quite convinced that this is a termite. The antennae seem too short and the cerci on the other end don’t look quite right either. I wonder if this isn’t in fact a beetle larva, perhaps something like a soft winged flower beetle (Melyridae). Both adults and larvae are predators of other arthropods and they do occasionally enter homes. Personally, I would rather find predaceous beetle larvae in my home, than termites. Regards.  Karl