Polyphylla decemlineata?
Speaking of flying objects… This fellow thought my eyeglass frame was a perfect landing site while we sat outside eating on the patio on a hot summer night. He was clearly attracted to the lights. I think it’s a 10-line June Beetle (Polyphylla decemlineata)? When I first picked him up (a “him” because of his fan-like antennae for sensing female pheromones), he let out a breathy, indignant squeak! I took him out to the pine duff where he might enjoy a healthy beetle supper of pine needles. He’ll also avoid further collision with me or a lit window out there. Thought you’d enjoy the images.
Lori
Altadena foothills, California 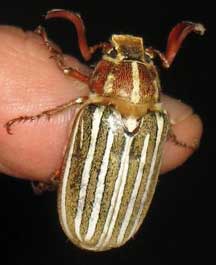 Hi Lori,
What a wonderful letter to accompany your photo of a Ten Lined June Beetle. The squeeking is known as stridulation. Despite living in Mt Washington in view of downtown Los Angeles and where there are numerous pines, we only encounter Ten Lined June Beetles in Pasadena at Art Center College of Design’s hillside campus when we teach during the summer. We see them on the bridge on the north side of campus outside of the library where they are also attracted to the lights.