Large, striped beetle with feathery antennae
Location: Monument, CO
July 10, 2011 1:04 pm
We found three of these beetles on our deck at night in the pine forest at 7200 ft. Roughly an inch long.
The dog that usually ignores beetles went nuts over them.
I’ve never seen before, especially the feathery antennae.
Signature: Dr. Lazer 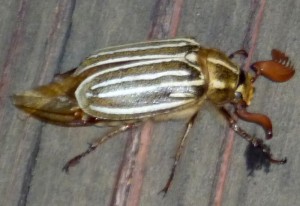 Dear Dr. Lazer,
The Ten Lined June Beetle in your photograph is a truly distinctive species.  It is found in the Western U.S. and since they are attracted to lights, that might explain why they were drawn to your deck.

Green Scarab Beetle from India is structurally coloured according to Wikipedia