Subject: Butt-High Butterfly
Location: Memphis, TN
August 10, 2017 9:55 am
Sorry to bother you again so soon, but I can’t ID this butterfly. It doesn’t quite match up with any of the orange and black butterfly images I’ve found. Most of those show white markings and/or less “raggedy” wing edges. I think the wingspan was 1.5-2″?
It was standing in the shadier part of our driveway not long after sunrise with its head and foreparts crouched down and its hindparts raised. The abdomen was curled so that its tip was vertical. Any idea why?
Thanks so much for this site.
Signature: Laurel 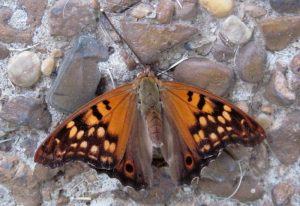 Dear Laurel,
This is a Tawny Emperor, Asterocampa clyton, which we identified on BugGuide, and it appears to be dead.  The position of its antennae is not something we would expect on a living butterfly.  According to BugGuide:  “Adults take fluid from dung, rotting fruit, carrion. Like the Hackberry Emperor, this butterfly is ‘friendly’, and likes to perch on sweaty humans.”

Countdown 19 more posts to the 20,000 Mark:Mourning Cloak in Mount Washington