Subject: Mad moth disease
Location: Clarksville, tn
July 18, 2014 3:30 pm
Let me tell you about this moth, it was pretty big. A little smaller than a luna moth, I found it while coming home from work. It was smashing itself into the ground over and over and over, and was so loud I thought it was a dog with long claws trotting up the street to me. I made an attempt to catch it, but the damn thing would not stop it’s furious flapping frenzy. Woke up this morning to find it dead on my porch with it’s abdomin busted out like it was possessed by something unholy! I’m mostly just curious, what kind of moth and what do you think did it in? Personally I’m thinking parasite possession!
Signature: Skye 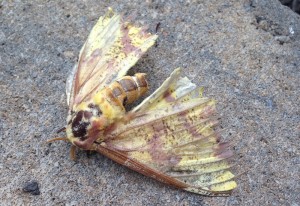 Dear Skye,
Based on its condition, this Bedraggled Imperial Moth was at the end of its short life, and it appears it encountered considerable trauma, perhaps getting caught in a storm or falling victim to some predator like a domestic cat or dog or possibly a bird.  One cannot appreciate the beauty of this lovely moth in its present condition, and we have numerous images of more pristine Imperial Moths on our site.  Like other members of the family Saturniidae, Imperial Moths do not feed as adults and generally live for less than a week, long enough to mate and lay eggs.