Subject: Weird big bug
Location: Potrerillos, Mendoza Province, Argentina http://goo.gl/maps/zYxOA‎
March 5, 2014 11:37 am
Hi! I’m from Buenos Aires, Argentina, and while visiting Mendoza we found this weird big bug in the mountain area ( http://goo.gl/maps/zYxOA ). It kind of looks like a hornet, but very passive and apparently more a walker than a flyer.
We asked some locals and it doesn’t seem to be very common (at least not closer to the city area). We took three very clear pictures, as the insect was hardly moving. This is my first submission but I remembered your page (I loved it) and thought of giving it a shot. I hope you can help, and manu thanks in advance!
Signature: Santiago Alvarez 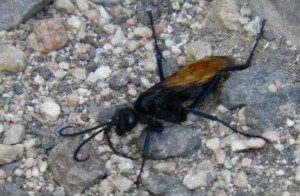 Dear Santiago,
This magnificent creature is a Spider Wasp in the family Pompillidae, and it is most likely one of the Tarantula Hawks, a group of large Spider Wasps in several genera that prey upon Tarantulas and other large Spiders, including Trapdoor Spiders.  The female is the hunter and the Tarantula Hawk hunts for a Tarantula which she stings and paralyzes.  She then buries the Tarantula after laying an egg on it.  The egg hatches and the wasp larva feeds on the paralyzed Tarantula, eating it while it is still living and helpless, ensuring that the meal will always be fresh meat.  Sometimes a Tarantula Hawk loses its battle with the Tarantula and becomes the prey instead of the predator.  These large, active wasps are sure to attract attention when they flutter their brightly colored wings while running on the ground.  The sting of a female Tarantula Hawk is reported to be quite painful. 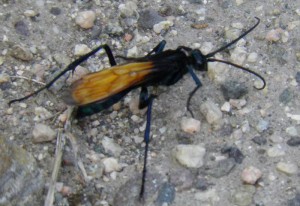 Thanks for the nice and quick reply! It’s great to know! 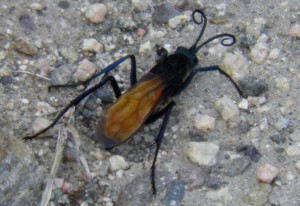