Subject: Bug! Big Bug! Texas brown tarantula, perhaps?
Location: Coryell County, central Texas
September 14, 2012 11:06 am
I found this new friend at our front door this morning at 10 AM, Sept. 14, 2012. Made a mundane trip to the grocery store rather more exciting than usual. We live in the heart of Texas, in southern Coryell County. We had a cool front blow in yesterday morning, and it’s been raining/drizzling steadily since. Temps are ranging between 65-80 degrees today, very humid. We live at the edge of town, with brushy pastures and oak trees at the end of our block.
I don’t think this spider likes the rain. Is it a Texas brown tarantula, perhaps a male? (Good old Wikipedia guess.)
Signature: Ellen from Texas 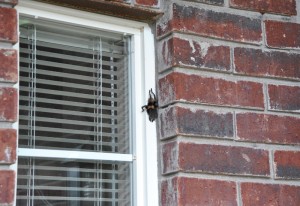 Hi Ellen,
What a wonderful surprise.  Male Tarantulas wander in search of mates and females are generally only found in or near their burrows.  This might be a Texas Brown Tarantula, Aphonopelma hentzi, but we cannot be certain  (See BugGuide).  To the best of our knowledge, all North American Tarantulas are in the genus Aphonopelma, and this is what BugGuide has to say about the identification:  “The Aphonopelma of North American are poorly known. Although many species have been described few specimens can be properly identified either by using available keys or by wading through species descriptions . Most identifiable specimens belong to species found in Mexico or Central America that are easily recognized by unique color patterns, such as that of A. seemanni . Correct identification of specimens collected within the United States is often suspect since determinations must be based on the process of elimination using collection dates and locality data in combination with coloration, coxal setation, and metatarsal scopulation .” 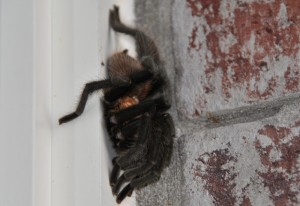 Subject: Bug! Big Bug! Part II
Location: Coryell County, central Texas
September 14, 2012 3:12 pm
Hi, I looked out the window and saw that the spider had moved. Don’t laugh, but I took quite some time easing my head out of the door in order to locate the spider. It climbed higher up the brick wall. Here are a couple of more photos. 3:10 PM on Sept. 14, 2012
Signature: Ellen from Texas 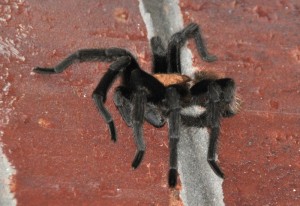 Thanks for the update Ellen.  We wonder if this might be a Desert Blond Tarantula, Aphonopelma chalcodes.  BugGuide only reports them from Arizona, but your individual sure resembles this photo from BugGuide.