Tanner or Sawyer Beetle: Root Borer from the UK

beetle
Location: Monmouthshire Wales UK
August 5, 2011 9:43 am
Hi
This chap flew into our kitchen last night attracted by the lights and we have failed to work out what he is. He was at least 2 inches long and gave several nips whilst we were trying to photograph him. It was a warm summer night in rural wales near a stream and river. Sorry the photos are bad he would not stay upright or still.
Signature: Heather

There is no photo attached.

Sorry had trouble sending the request.
Have attached some to this reply I hope.
Thanks for your time and interest.
Heather Morgan and family 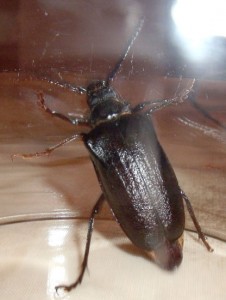 Hi Heather,
This is a member of the Longhorned Borer Beetle subfamily Prioninae, and in North America they are known as Root Borers and sometimes Sawyers, though that name can also apply to another group.  We were not aware that any large Prionids lived in the UK, so we became obsessed with finding the identity of your beetle.  After some searching, we discovered the Bioimages UK website and it contained some images of what we believe is your beetle, Prionus coriarius, commonly called a Tanner Beetle or Sawyer Beetle.  The male individual was photographed in Surrey on August 3, 1975.  The Prionids have pronounced sexual dimorphism and the sexes can be distinguished by the antennae.  Your individual is a female.  The Bogbumper website calls Prionus coriarius:  “one of the UK’s largest.”  Zipcode Zoo refers to it as a Sawing Support Beetle.  For a beetled alleged to be found in Europe and UK, there is a surprising dearth of information available on the web, though there are some images.  We cannot help but to wonder if its numbers are declining.

3 Responses to Tanner or Sawyer Beetle: Root Borer from the UK