Currently viewing the tag: "What’s on my Woody Plant?"

Gardeners are frequent contributors to our site because of concerns they have differentiating beneficial insects from injurious species. With more and more gardeners attempting to cultivate Cannabis, we started noticing more identification requests from growers. We hope we are offering a public service by responding to our readers’ questions without sensationalizing or taking sides surrounding the legalization of marijuana.

Subject:  Identity
Geographic location of the bug:  Mount Washington, Los Angeles, California
Date: 08/15/2018
Time: 06:18 PM EDT
Your letter to the bugman:  Is this katydid nymph? (on Cannabis leaf).
How you want your letter signed:  Mel Frank 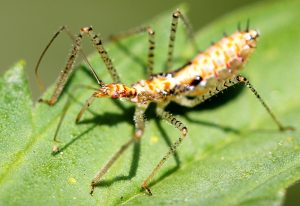 Hi Mel,
This is much better than a Katydid nymph.  It is a predatory Assassin Bug nymph, and we identified it as a Leafhopper Assassin Bug nymph, Zelus renardii, thanks to these images posted to BugGuide.  According to BugGuide:  “Generalist predator (despite its common name suggesting host specificity).”  It is also pictured on the Natural History of Orange County site.

Why are the immature Leaf Footed Bugs acting strangely on the Woody Plant???

Subject:  What’s Hatching on my Super Lemon Haze?
Geographic location of the bug:  Mount Washington, Los Angeles, California
Date: 08/13/2018
Time: 09:32 AM EDT
Your letter to the bugman:  Dear Bugman,
I’m sorry to trouble you again so soon, but because I am very nervous regarding Budworms, I am trying to inspect my plants carefully every day.  Today I noticed these creatures hatching from eggs laid on my Super Lemon Haze hybrid.  They were moving around the eggs quickly and appeared to be crawling on top of one another.  What’s going on here?  Do I have a need to worry?
The first photo was shot without a flash and the other two were shot with a flash.
How you want your letter signed: Constant Gardener

Dear Constant Gardener,
These appear to be Stink Bug Eggs, possibly from the Red Shouldered Stink Bug you submitted yesterday, but those are not Stink Bugs that are hatching.  We immediately suspected some Parasitoid Wasp, so we researched Parasitoids that attack Stink Bug eggs, and we found this image on BugGuide of a parasitoid in the genus Telenomus that looks similar to your individuals and this image on BugGuide of another member of the genus.  We also located this image on BugGuide of a different parasitoid in the genus Trissolcus and this image on BugGuide of a member in that same genus, both of which have also parasitized Stink Bug eggs.  Of the latter genus, BugGuide indicates:  “parasitize eggs of Pentatomorpha.”  Your images lack critical sharpness due to soft focus, and the images taken with flash also have some “ghosting” from a slow shutter speed.  Additionally, we lack the necessary expertise to provide an accurate species or genus identification, but both genera are in the subfamily Telenominae in the family Platygastridae, and this represents a new subcategory for our site.  Furthermore, your images are excellent examples of how pests can be controlled with organic methods. 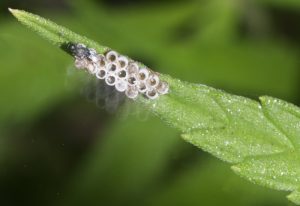 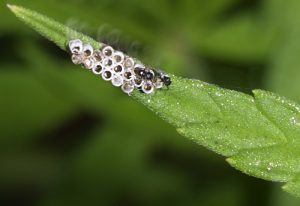 Subject:  What’s This Bug on my Super Lemon Haze hybrid?
Geographic location of the bug:  Mount Washington, Los Angeles, California
Date: 08/12/2018
Time: 08:30 AM EDT
Your letter to the bugman:  Dear Bugman,
I was out inspecting my garden this morning and discovered a new bug on my Super Lemon Haze hybrid.  Is this a friend or foe?  I am especially concerned as my plants are beginning to bud.
Thanks
How you want your letter signed: Constant Gardener 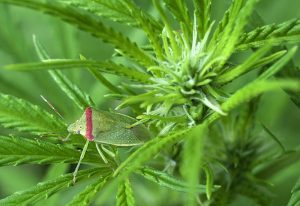 Dear Constant Gardener,
This is a Stink Bug in the family Pentatomidae, and most members of the family feed on plants by piercing the surface and sucking fluids with a proboscis, while others are predatory and beneficial in the garden.  We quickly identified your individual as Thyanta pallidovirens thanks to this BugGuide image, but unfortunately, BugGuide does not provide many specifics on the species or its feeding habits.  Encyclopedia of Life calls this species the Red Shouldered Stink Bug.  The University of California Integrated Pest Management System recognizes it as a pest of tomatoes and other crops, so our opinion is “foe.” 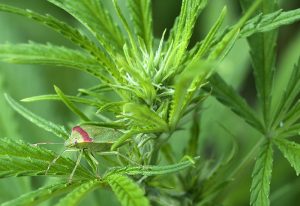 Facebook Comment from Jason Stowe:
It seems the easiest way to get a question answered or a bug identified is to take it on a pot plant.

Rebuttal from Our Editorial Staff:
Over the years, we have created tags related to specific plants that have ecosystems associated with them, including Milkweed Meadow, Goldenrod Meadow and Tomato Bugs as well as the recently added What’s on my Woody Plant?, the latter focusing on insects found by home Cannabis growers.  What’s That Bug? currently has 26,186 unique postings and only 33 are archived on the tag that targets Cannabis growers.  That represents .126% of our postings.  That said, Jason Stowe is exaggerating.  By comparison there are 973 postings currently archived on WTB? Down Under representing 3.72% of our postings, so, in fact, a far easier way to get something identified is to move to Australia.  Also, for the record, what we really hate identifying are victims of Unnecessary Carnage, yet we have identified 263 of them, and that is only the submissions we have posted and tagged, and does not take into consideration replies we have made but not posted. 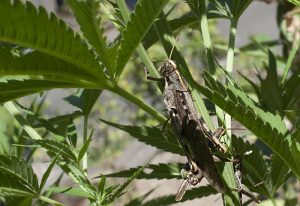 Dear Constant Gardener,
We really don’t believe insects engage in voyeuristic behavior, nor do we believe Grasshoppers take turns.  We suspect this mature female Gray Bird Grasshopper, Schistocerca nitens, released pheromones that attracted both males and either the one who arrived first or the more aggressive male got the prize.  We would have loved to have seen an image of the pair flying off in flagrante delicto.  We hope your crop is not decimated by Locusts because according to BugGuide:  “Apparently overwintering primarily as eggs, hatching over an extended season from spring to late summer (perhaps hatching is related to rainfall events?), and maturing from late spring till late summer or early autumn. Some adults overwinter, and perhaps nymphs too (?). It is possible that southward there are two broods, but this is not clear. In tropical regions south of the U.S., and perhaps in southernmost Texas and coastal California, all stages can be found at most any time of year.”

Subject:  Drama on my Sweet Sarah clone
Geographic location of the bug:  Mt. Washington, Los Angeles, California
Date: 08/04/2018
Time: 11:08 AM EDT
Your letter to the bugman:  Dear Bugman,
I hope you don’t mind that I keep sending pictures of the same two predators that have taken up residence on my Sweet Sarah clone.  The California Mantis was missing for a few days and then it reappeared looking quite a bit bigger.  I noticed this drama today.  What was really interesting was that as soon as she got close to the Green Lynx Spider, he leaped out of reach.  I haven’t found a single grasshopper on this plant, while I have to pick them off the rest of my crop.
How you want your letter signed:  Constant Gardener 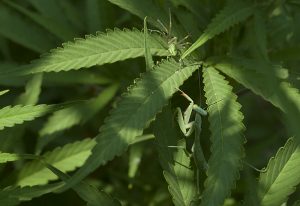 Dear Constant Gardener,
Keep your images coming.  We applaud your organic gardening methods and natural pest control.  When an insect molts, it becomes much more vulnerable to attack, at least until its new exoskeleton hardens.  Since your California Mantis has grown, it must have molted, so it probably was in hiding until its new exoskeleton hardened sufficiently, explaining why it was missing for a few days.

Subject:  Brunch
Geographic location of the bug:  Mt. Washington, Los Angeles
Date: 07/28/2018
Time: 04:57 PM EDT
Your letter to the bugman:  I spotted this couple at brunch on Saturday afternoon while visiting Mt. Washington.  My friend, Constant Gardener, mentioned that honey bees do not pollinate Cannabis. What led this sweet little honey bee astray?
How you want your letter signed:  Melanie on the Irish Chain 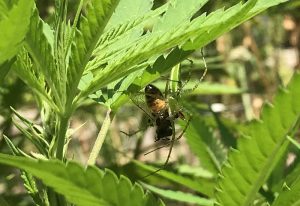 Dear Melanie on the Irish Chain,
Your friend and WTB? contributor Constant Gardener is correct that Honey Bees do not pollinate Cannabis, which is pollinated by the wind.  Earlier this year, we were surprised to see Honey Bees on wind pollinated, endangered California Black Walnuts.  We are confident pollination was not the goal of the Honey Bee, but we can’t think of a logical reason it would visit the plant and fall prey to that Green Lynx Spider that was so well camouflaged among the leaves.  Surprisingly, we found many images online of Honey Bees and Cannabis.  According to the Science Explorer:  “Many people are calling the man who trained bees to make honey from marijuana a genius.  It is something many have talked about doing, but no one has been able to successfully pull it off.  At least until now, of course. His name is Nicholas Trainer. … Trainer managed to train his bees to make honey after gathering resin from the cannabis plants.  ‘I have trained bees to do several things, such as collect sugar from fruits, instead of using flowers,’ Trainer said.  “The aim arose for me to get the bees to obtain this resin.”  By using what he calls “a training technique whereby the bees collect the resin and use it in the beehive,” Nicholas and his bees, which are solely responsible for the final substance, have created the world’s first batch of cannahoney.”  According to Real Farmacy:  “Many are calling him a genius. He is an artisan, locksmith and above all else, he explains, a beekeeper. He has accumulated over 4,300 Facebook followers, and 700 on Instagram, after the 39-year-old Frenchman — who describes himself as an advocate of medical cannabis and of complete cannabis legalization — trained bees to make honey from cannabis.  He goes by the nickname of Nicolas Trainerbees, for obvious reasons. For 20 years, he has worked with bees in a way he claims allows him to “train” them to make honey from virtually anything.”  According to The Organic Dream:  “Nicholas says that he was told by many people that it couldn’t be done, that the marijuana plant was not capable of being pollinated by the bees, who normally specialize in flowering plants, and that even if he succeeded, the bees would be harmed in the process.  But after twp years of trials Nicholas has found that the process actually works really well, and the bees are not harmed at all, in fact they seem to love it!  He concludes that as bees have no endocannabinoid system, they are not affected by the cannabinoids in the same way that humans are, that sometimes makes them drowzy or lethargic.”  According to Weedistry:  “From what we know, bees are attracted to brightly colored flowers that produce pollen and nectar. Most cannabis is pollinated by wind and the flower color is not normally bright enough to attract bees. The male cannabis plants produce pollen but most cannabis that is grown is from the female sinsemilla plants that are not pollinated and do not produce seeds. If bees were to pollinate marijuana it would be at a complete last resort but don’t worry about the bees getting ‘high’. Bees do not contain receptors that connect to the cannabinoids found in marijuana so they will not feel the buzz that people feel.”  Perhaps a bee-keeper in Mount Washington is training Honey Bees as well, which could explain your Food Chain image.  The plant in your image does not appear to have any buds yet, so the reason the Honey Bee was lured to this plant is still a mystery.