Subject: help me identify this fly
Location: Baie-Comeau,Quebec,Canada
September 10, 2012 2:48 pm
I found this fly in front of my house.I live in Quebec,Canada.In a small town called Baie-Comeau.I’ve never seen such fly arround here and no one I know either…It was half inches long and about same wide with the wings.
wSignature: Pierre Murray 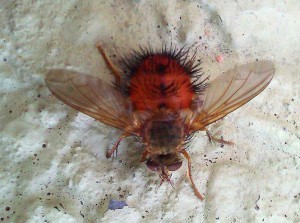 Hi Pierre,
This distinctive fly is a Tachinid Fly, and we believe the species is Hystricia abrupta based on images posted to BugGuide.  The range is also consistent with your sighting.  Tachinid Flies are important parasites that prey upon a variety of insects and arthropods.  According to BugGuide:  “Larval stages are parasitoids of other arthropods; hosts include members of 11 insect orders, centipedes, spiders, and scorpions. Some tachinids are very host-specific, others parasitize a wide variety of hosts. The most common hosts are caterpillars. Most tachinids deposit their eggs directly on the body of their host, and it is not uncommon to see caterpillars with several tachinid eggs on them. Upon hatching the larva usually burrows into its host and feeds internally. Full-grown larva leaves the host and pupates nearby. Some tachinids lay their eggs on foliage; the larvae are flattened and are called planidia; they remain on the foliage until they find a suitable host.”