Subject: Fly, Hoverfly, or what?
Location: Columbus Ohio
July 6, 2012 3:29 pm
Saw this largish fly type insect on my roses, and wondered what it was. You’ll see it’s on a standard rose leaf, so you can see the size fairly well.
Signature: Robin 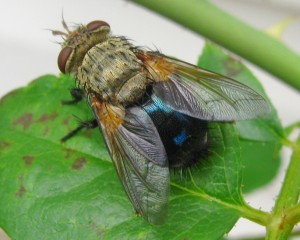 Dear Robin,
Though we never know the species without looking it up, we can at least identify many Tachinid Flies to the family level.  Tachinid Flies are a large family and they often have bristly bodies.  They are parasites that prey on a large variety of arthropods.  BugGuide states:  “Larval stages are parasitoids of other arthropods; hosts include members of 11 insect orders, centipedes, spiders, and scorpions. Some tachinids are very host-specific, others parasitize a wide variety of hosts. The most common hosts are caterpillars. Most tachinids deposit their eggs directly on the body of their host, and it is not uncommon to see caterpillars with several tachinid eggs on them. Upon hatching the larva usually burrows into its host and feeds internally. Full-grown larva leaves the host and pupates nearby. Some tachinids lay their eggs on foliage; the larvae are flattened and are called planidia; they remain on the foliage until they find a suitable host.”  Unless this combination of markings is more common than we suppose, we believe we have correctly identified this Tachinid Fly as Archytas apicifer thanks to BugGuide.