caterpillars
Hi! I found your site several weeks ago after my arm grazed a Saddleback Caterpillar. After several minutes of frantic searching, certain that the bubbling flesh sensation on my arm was a harbinger of death, I was relieved to learn that the toxin is usually just a nuisance. Discovering that there are so many bizarre caterpillars that I?ve never seen before helped me deal with the discomfort of the sting. Since then, I?ve used your site for a few other identifications. Here?s a caterpillar I came across yesterday. It looked rather like the Tussock Moth caterpillars pictured on your site, but not quite. After delving deeper into the Tussock category, I believe it?s a Sycamore Tussock Caterpillar. I don?t think you have a picture of this particular variety. I?m still having trouble identifying this rust-colored caterpillar that looks like it has facial hair. After viewing all of your caterpillar shots, I think it’s vaguely Dagger-ish, but I’m not convinced. Any ideas? I live in southern Maryland. Thanks so much for your great work!
~MM
PS– On the camera front: I?ve also learned that my Cannon Powershot is great for many things, but shooting moving fuzzy caterpillars is not among its strengths. So far, nothing holds a candle to my old Pentax K-1000. 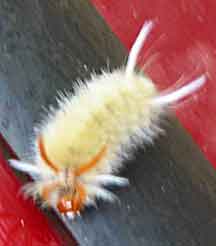 Hi MN,
Thanks for sending us an image of the Sycamore Tussock Moth, Halysidota harrisii. Researching its scientific name led us to a caterpillar site we hadn’t visited before, Tom Murray’s Moth Caterpillars. We agree your other caterpillar is probably a Dagger Moth, but the photo is quite blurry.