Subject: Orange Insect with Itty Bitty Head
Location: Northern Burbs of Atlanta
April 18, 2013 11:43 am
My daughter spotted this bright interloper on our bookshelf this afternoon. We’ve never seen an insect like this before and were at a loss for its identity. If pushed I’d say it was a type of assassin bug since it bears physical characteristics like its itty bitty head to others I’ve seen. Is it an assassin bug? And if so is it one with a painful bite? After the photo shoot I gently relocated it outdoors. Thanks for your assistance.
P.S. Sorry for the poor detail quality of the pics. I only had my camera phone handy.
Signature: Resa 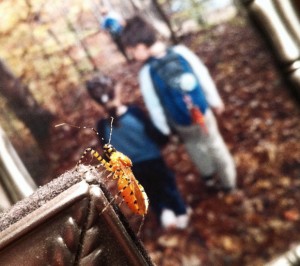 Dear Resa,
We actually love your photo.  This is a Sycamore Assassin Bug in the genus Pselliopus and if memory serves us correctly, it is one of the species that will more readily bite.  The bite of an Assassin Bug can be quite painful, though it is not considered dangerous.  As with many things, reactions can vary between individuals.  You should caution the children not to handle the Assassin Bugs.  The Prince William Conservation Alliance has a beautiful image of a Sycamore Assassin Bug.

One Response to Sycamore Assassin Bug