Amber Assassin Bug
Location:  Cosby, TN
December 30, 2012
Hi and Happy New Year!
Found this black ‘n’ white adorned critter in my kitchen sink today.  I haven’t been able to find very much information about it, other than it’s been found in Florida, Maryland, Massachusette, Pennsylvania, and Virginia, and I was hoping that you might be able to provide more info.
December 30, 2012
Cosby, TN ~ The Great Smoky Mountains
Thanx,
Renée 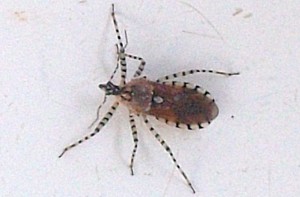 Dear Renée,
This is a Sycamore Assassin Bug in the genus Pselliopus.  According to BugGuide, there are three species found in the Eastern U.S. and we do not feel confident identifying your specimen to the species level as they look so similar.  Like other Assassin Bugs, they are predators and according to BugGuide, they search for their prey in:  “Meadows, fields; typically on flowers.”  BugGuide indicates that:  “Adults hibernate under rocks, bark, sometimes in groups” and since many Heteropterans or True Bugs seek shelter from the winter cold in homes, that could explain why you found this individual in your kitchen sink.  We don’t know where you found the name Amber Assassin Bug but we did find a BugGuide posting with that description for Pselliopus cinctus.  In the future, please use our standard form for submissions.

One Response to Sycamore Assassin Bug