Subject:  Swarming Dragonflies
Location:  Corralitas Red Car Property, Silver Lake, Los Angeles, California
July 15, 2014 10:30 AM
This morning we accepted an invitation to walk the Corralitas Red Car Property with community activist Diane Edwardson and we evaluated the merits of preserving the site as open space.  A large Tarantula Hawk was flying about lazily and then we saw some of the California Harvester Ants that Diane observed swarming about a month ago, but the real treat was seeing a large swarm of Dragonflies circling an endangered California Walnut Tree.  They did not appear to be feeding or mating, and there were at least 50 large Dragonflies in a small bit of air space.   Though we could not get a clear image of a static individual, the large size and overall green coloration has led us to speculate that the Dragonflies are Green Darners. 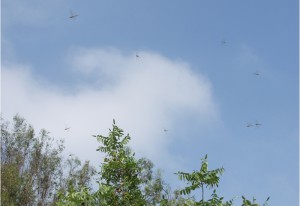 In researching this behavior we learned that the North Carolina Museum of Natural Sciences states:  ” Dragonflies swarm for two reasons.  Dragonflies are predators so if there is abundant food in the area, i.e. lots of small flying insects such as mosquitoes or other flies, a swarm may form in the same area.  In these static swarms, the dragonflies fly back and forth over a specific, well-defined area, eating the small flying insects within that space.  Dragonflies also migrate, so you might see large groups of them flying together in a single direction, either to escape poor local conditions (dry, very hot) or to seek warmer regions in the fall.  Migratory swarms can contain several million dragonflies and travel thousands of miles!”  Though we did not observe any prey, we can only presume that smaller swarming insects were providing food for this magnificent aerial display.  More information on swarming Dragonflies can be found on BayNature. 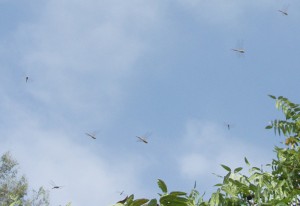