Subject: Driveway Swarm of these Flying Insects
Location: Southern California
May 4, 2017 8:58 pm
This morning there were hundreds of these flying insects lying dead in the driveway, grouped in a fairly small area about 6 feet across. I scooped up a few onto white paper, added a ruler and took a picture. I’m curious – are these flying ants or are they (heaven forbid) termites?
Signature: Gene 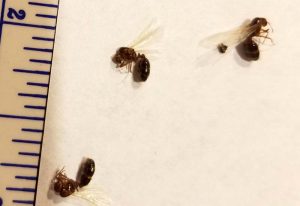 Dear Gene,
These are the reproductive alates of the only species of Ant ubiquitous across Southern California, the Argentine Ant.  When it is time to swarm, winged males and females take flight to mate and start new colonies.  In our opinion, the Argentine Ant is the most destructive invasive exotic species in Southern California, and it does much more damage than the dreaded Med Fly.

Correction:  May 14, 2017
We just received a correction from Ben that these are more likely Red Imported Fire Ant alates, and this BugGuide image does support that correction.  According to BugGuide:  “native to South America, adventive in our area and spreading throughout so. US north to MD-IL-MO-TX-CA); introduced to many Old World countries” and “The most aggressive and widespread of the fire ants found in North America. It was introduced into the US from Brazil between 1933 and 1945.  If their nest is stepped on, the workers rush out and sting the feet and legs of the intruder. Each sting results in a small, painful wound that develops into a pustule in 24-48 hours. As the pustules heal they become itchy and can become infected.”