Subject: Swamp Darner attacked by hornet
Location: Rochester, NY
August 10, 2015 1:51 pm
Hi!
While trying to identify the dragonfly in my picture I came across this post of yours:
2009/09/03/european-hornet-eats-dragonfly-unknown-darner/
and the comments led me to correctly identify the dragonfly as a Swamp Darner, as it is identical to the photos and descriptions on BugGuide, here: http://www.bugguide.net/node/view/2584 The dragonfly pictured was easily 4-5 inches in length.
I believe the attacker may be a European Hornet, as it look very similar to the insect in the original post?
I took this photo August 8th in Rochester, NY. I noticed a loud buzzing and the sound of the dragonfly hitting the glass door several times as he valiantly attempted to keep flying and fend off his attacker. The efforts became more feeble and the hornet appeared to be crawling around going straight for the underside of the thorax. The dragonfly kept curling his abdomen, but after several minutes he seemed pretty much gone, and I could have sworn I heard crunching- the hornet eating his prize.
It was a pretty incredible sight; the kids I was babysitting had very different reactions. The 9 year old, “it’s probably laying eggs in the dragonfly,” and walked away unconcerned. The 2 year old kept trying to go touch it and seemed very concerned for the dragonfly’s well-being.
I thought you might appreciate the picture. Sorry it’s captioned; it’s the only one I had time to get while keeping a 2 year old away from touching!
Signature: Jamie 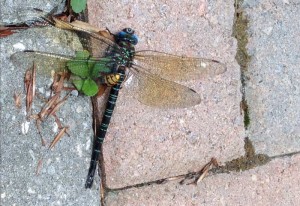 Hi Jamie,
Your image is an excellent documentation of this Food Chain scenario, but your written account of the observation is especially interesting.  We agree the predator is a European Hornet, and the long term effect that these top of the Food Chain introduced Invasive Exotic predators is having on the native insect population like this Swamp Darner may or may not be significant.