Dear What’s that Bug?
Last night, as I was preparing to bicycle over to a friend’s house, I noticed that my chain had fallen off. When I bent down to reattach it to the gear ring, I noticed this little feller, quite dead, resting on my derailer cables. I enjoyed keeping him on my bike for a few miles, as bugs are the only hitchhikers a cyclist can really pick up. I was charmed to have a rider, despite his deadness. When I brought my bicycle into my friend’s home, it was time for my rider to leave (not polite to bring cockroaches into a home, even if they aren’t breathing), and I ripped a page from a nearby phone book and prepared a makeshift coffin. It was only later that I wondered about the connection between my chain falling off and the presence of the bug. Could there possibly be a cause and effect at work here? Was this cockroach some sort of suicide attacker, hoping my chain problem would cause me to have an incident? Can bugs be devious? Are there any cockroaches in Al Queda? Should I call Homeland Security? Please advise.
Thanks,
Another paranoid American. 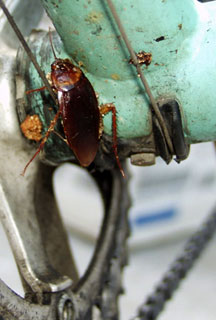 Dear Paranoid American,
While I would like to assure you that this was just a random event, ask any homemaker, and you will be assured that Cockroaches are indeed devious, well-organized and capable of planning strategies. What is most disturbing about your hypothesis is that appears to be an American Cockroach, Periplaneta americana, a non-native immigrant despite its name. If there is an Al Queda connection, it would be frightening to think that we may soon be on high alert against six legged foes. This is way too big for What’s That Bug? to handle and most assuredly a job for the leader of the Free World.