It is important to understand the pest you are dealing with before termite treatment. In this blog, we look at subterranean vs drywood termites., and the differences between the two

Termites are troublesome creatures and are a piece of major bad news for your home and its pieces of furniture.

These insects live in big colonies and are capable of destroying almost all wooden possessions and parts in your home. Thus, it is crucial to know how to deal with these insects and eliminate them.

There are three common types of termites found in the US: damp wood, subterranean, and dry wood termites. In this article, we will talk about dry wood and subterranean termites.

We will focus on the major differences between the two and how you can identify them to take the proper measure to get rid of them from your homes.

What Are Drywood Termites?

Drywood termites are a member of the termite family that are usually seen living in dry wooden structures like home furniture, banisters, wooden picture frames, and more.

These types of termites live deep inside wooden structures and rarely come out to the surface. They live in smaller colonies that consist of fewer than 1,000 insects.

If you spot a dry wood termite, it is probably a flying adult commonly known as a swarmer.

What Are Subterranean Termites?

A subterranean termite is a type of termite that is known to have nests and colonies built within the soil.

You will be fascinated to know that these social insects live in colonies that are divided in classes based on their work.

The settlements are divided into three types: reproductives, worker termites, and soldier termites. Each type performs specific duties, which we will discuss in detail in the upcoming sections.

Difference Between Drywood and Subterranean Termites

Despite both of them being members of the termite family, the dry wood and subterranean termites have notable differences.

Their physical appearance, nesting habits, where they live, and what signs to look out for are all unique. Let us take a look at these differences closely.

One thing you will immediately notice is the stark difference in the wings.

The dry wood termite has a series of veins on the top edge of the wing.

Unfortunately, both types of termites will lose their wings as soon as they land in your territory. That makes their body ideal for crawling into food sources.

Hence this type of differentiation is not easy to make once they have established their colonies.

Another thing to watch out for when you see these two species is that drywood termites are bigger in size compared to subterranean termites.

Lastly, the head of drywood termites is orange, whereas that of the subterranean species is dark or black in color.

Subterranean termites are known to build underground nests for the growth of their colonies.

Drywood termites, on the other hand, build nests inside their food source, which is mainly dry wood that they obtain from indoor furniture, photo frames, and more.

As mentioned above, it is difficult to find drywood termites out in the open as they live inside the wood.

But you can track a drywood termite nest by the presence of the common sign of micro wooden pellets that look like sawdust near their nests.

Subterranean termites are known to build nests with mud tunnels that link them directly to the food source. This also serves to give them adequate protection from predators.

Drywood termite colonies are small; each territory has fewer than 1000 individuals residing.

Subterranean termites live in enormous colonies that are divided according to a working-class system. The settlement has three types of termites: reproductives, soldiers, and workers.

Workers occupy a significant fraction of the population as they are responsible for the building and food collecting jobs.

The soldiers are comparatively fewer in numbers and are known to provide protection to the colony. Reproductives are tasked with continuing the colony and making it grow.

Both these types of termites are capable of doing extensive damage to your home.

But due to large numbers, the subterranean termites can cause more damage and do it faster than the drywood termites.

Subterranean termite colonies can have as many as 60,000 workers at a time, picking out your wood and causing damage to it.

While both these termites can cause significant harm to your home, it is essential to use the correct treatment process.

Drywood termite infestation is comparatively easier to treat (because their colonies are smaller), and most pest control professionals will eliminate a whole colony using common termiticides.

The subterranean termite infestation is a little harder to handle. You can use Sentricon to get rid of them. Here, a worker termite consumes a poisoned bait and returns to the nest to infect the colony. This poison slowly kills the termites by making them unable to eat and breed.

What is worse, drywood termites or subterranean termites?

How can you tell if you have subterranean or drywood termites?

Subterranean termites use mud tunnels that connect the nest to the food source. So if you notice such mud tunnels existing in your home, it is the subterranean termite.
If you find micro-wooden pellets like sawdust in some corners of your house, it indicates the presence of drywood termites.

Subterranean termites usually prefer eating the soft part of the wood, which is commonly found in the grain.
These termites also like to chew on softwood like pine. They obtain cellulose from the wood, which is later converted into nutrients by enzymes in their body.

Subterranean termites are known to cause significant damage to your wooden furniture. They use their saw-toothed jaws to carve through your home furniture.
A small colony of these termites can have around 60,000 workers and can consume around ⅕ ounces of wood on a daily basis.

Where do termites live?

Subterranean termites live in contact with soil. They make mud tubes with a mixture of soil and saliva to connect their nests with wood structures, including softwood furniture, wooden support beams, and more.
The drywood termites directly reside inside the food source and are known to damage the furniture in your house silently.

Termites can be problematic to deal with, be it the drywood termite or the subterranean termite. You must know them properly in order to deal with them effectively.

We hope this blog has helped you understand these creatures well and equipped you to handle them properly.

Thank you for taking the time to read this article!

Subterranean and drywood termites can both cause a lot of damage.

Many of our readers have asked us questions about how to differentiate between the two and how to get rid of them.

Read through some of these emails and learn from their experiences. 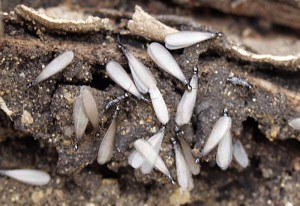 Ed. Note: 30 November 2008 Since we heard about other Southern Californians noticing the swarming Western Subterranean Termites over the past few days, we decided they would make an excellent Bug of the Month for December 2008 27 November 2008 Today while splitting wood at our Mount Washington, Los Angeles offices, we noticed the Western Subterranean Termites, Reticulitermes hesperus, emerging from the logs at the bottom of the wood pile. After two days of heavy rain, the late autumn sun triggered the nuptial flight. With the sun so low in the sky, the feeble flying swarm filled the air for several hours, emerging from nearby properties as well as our own. Charles Hogue has written in his wonderful book, Insects of the Los Angeles Basin: “on warm sunny days following the first autumn rains, swarms of the winged adult forms of this termite are commonly noticed emerging from frame houses, fence posts, and other wooden structures that touch soil. The species has a high humidity requirement, which forces it to maintain contact with the ground, traveling up and down between its subterranean galleries and the wood through protected cracks in mortar or concrete foundations, or through earthen tubes that it constructs from soil, saliva, and chewed bits of wood. In Los Angeles and much of the West, this is the species that causes the greatest damage. It is probably safe to say that the majority of older houses in the Los Angeles area are infested to some degree with this termite. In general, however, damage is not noticeable until tunneling activity has proceeded to the point of weakening structural members in stressed areas, such as flooring and stairways. Severe damage requires a period of years to develop: our termites do not reduce a house to a pile of sawdust overnight! Homeowners are urged to have periodic inspections to determine the presence of termites. This is simply good insurance and should be done regardless of how many preventative methods were employed in the original construction. This species is distinguished from others that are prevalent in the basin by the black heads of its sexual forms, its earthen tubes, and the fact that it does not make pellet piles. Its tunneling pattern is also different: the workers attack wood only in the soft spring growth region of the annual rings. Thus a cross-section of an infested timber shows a characteristic pattern of concentric circles or arcs.” 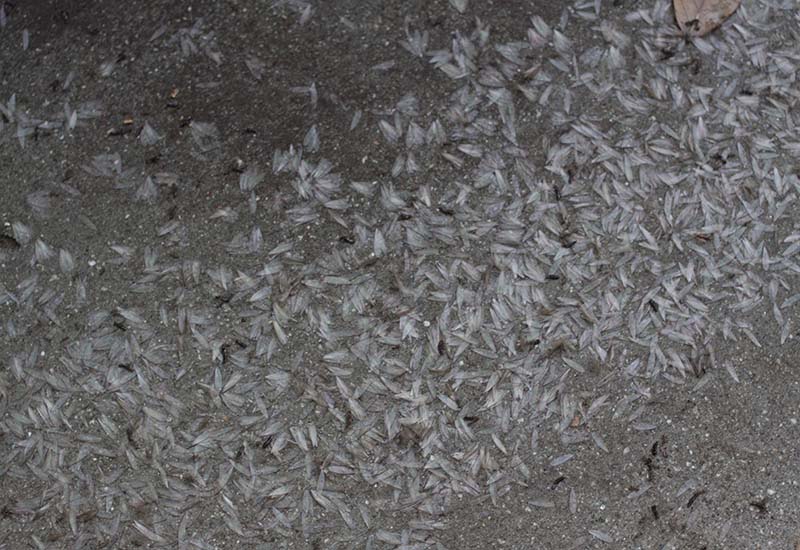 Subject:  Western Subterranean Termite Alates Geographic location of the bug:  Mount Washington, Los Angeles, California Date: 11/22/2018 Time: 12:30 PM EDT For the past week, What’s That Bug? has been experiencing technical difficulties receiving images after a recent software update.  While we have been unable to post any new submissions from our readers, Daniel took some images of recent insect activity near the WTB? offices.  Los Angeles got some badly needed rain last Wednesday night, and then on Thanksgiving Day, Daniel noticed several interesting semi-circles of Termite Wings after he noticed the dreaded Argentine Ants out in large numbers.  Though this is only speculation, Daniel believes that when the winged Termite alates emerged from the wooden fence, they were attacked by the ants before they had a chance to take wing.  The beautiful day did reveal a goodly number of flying Termites getting eaten by black phoebes and other insect feeding birds.

3 thoughts on “Subterranean Vs Drywood Termites: Which Is Worse?”