Subject: Cool Brown Moth
Location: Merritt Island and Melbourne, FL
January 29, 2017 1:41 pm
Hello Bugman, I live in Brevard County Florida. It’s winter time here in Florida do about 70 degrees. I’ve seen this moth in two different areas of the county in which I live. Two of the pictures were take outside of my apartment door in Merritt Island, FL. The moth was there for about three days before a storm came and he flew away. Two days later I saw the same type of moth on the ground outside of my work place in Melbourne, FL. I think he followed me to work hahaha!! I think he’s an Achemon Sphinx? Looks similar to those pictures. I would love to know for sure!! Thank you so much!
Signature: Elizabeth Merritt 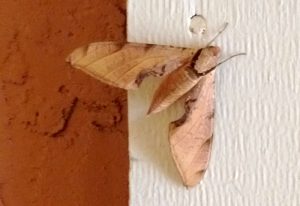 Dear Elizabeth,
Like the Achemon Sphinx, your individual is a member of the family Sphingidae, but it is a Streaked Sphinx, Protambulyx strigilis, a tropical species regularly found in Florida, that has been known to stray farther north as well.  According to The Sphingidae of the Americas:  “In Florida larvae have been found on Schinus terebinthefolia.”