Mystery creature in creek
March 9, 2010
Hi there,
I was enjoying the lovely weather yesterday and took the opportunity to wade through our creek–after flipping some rocks over, I found this guy on the underside. It was probably 4 or 5 mm long. I’ve never seen anything like it, and was hoping you could shed some light on the mystery.
Thanks in advance! I just love the site.
Dakota
Black Mountain, North Carolina 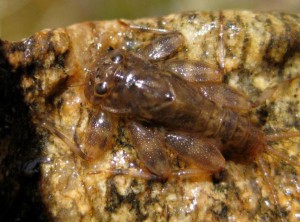 Hi Dakota,
You have discovered the aquatic larva of a Stonefly, known as a naiad.  We are linking to an image on BugGuide that was identified as being in the genus Acroneuria, but we are not certain if that is the same genus as your specimen.  According to BugGuide:  “nymphs are often found under large stones in streams and rivers” and “nymphs prey mainly on small aquatic invertebrates such as larvae of chironomids, mayflies, and caddisflies; detritus and algae are also eaten.”

Correction courtesy of Karl
Hi Daniel: This naiad appears to have three tails (cerci) not two, which would make it a mayfly.  It looks lake a “clinger” mayfly (Ephemeroptera: Heptageniidae), possibly in the genus Maccaffertium.  You could also check out Stenonema which look very similar, but most of the species in this genus have recently been moved to Maccaffertium or Stenacron.  The Heptageniidae are well known to fly fishers and include the popular March Brown (Maccaffertium [=Stenonema] vicarium) and Cahills. Regards. K

Thanks for watching our back on this one Karl.  We were in a rush this morning.

Mayfly from the UK

One Response to Mayfly Naiad, not Stonefly Naiad