almost lunch
Location: Salad Greens purchased in NS, Canda
September 28, 2011 7:46 am
This was in a box of salad greens I opened in June 2011. I am remiss that I don’t remember the country of origin for the box. It was so unique looking that I snapped some pictures to try and identify but that has not proven to be very easy.
Thanks!
Signature: Angela 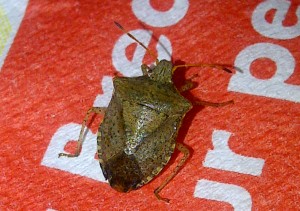 Hi Angela,
This is some species of Stink Bug, and we hope you derive consolation from the knowledge that many Stink Bugs are edible, and should you have accidentally eaten it, there would probably not have been any adverse reactions.  Here is some information from the Girl Meets Bug website:  “Jumiles: also known as stink bugs. High in B vitamins, these are said to taste either bitter or like cinnamon, and may have tranquilizing and analgesic properties. Apparently, they can survive the cooking process, and thus are often eaten alive. The yearly Jumile Festival involves the eating of thousands of jumiles, and the crowning of a Jumile Queen.”  Sadly, it appears that information came from Wikipedia. 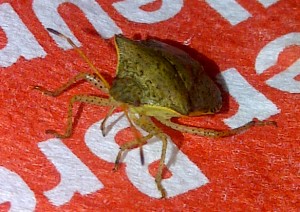 Thanks for getting back to me. I really appreciate your time. Not sure I’ll try eating one if another shows up, but it is good to know it is an option.
Again, Thanks.
Angela