Three Bugs from near Sedona, AZ
I was trying to find out what type of beetle we came across on our last trip to the Oak Creek area of Sedona in June of 2003, when I found your way cool site. This photo was taken near the part of Oak Creek where so many of the pretty pictures of Cathedral Rock are taken. I think this might be a type of ground beetle. It was about two inches long — when threatened, it put its head down while tipping its rear end up. If you can identify any of these, I’d be grateful.
Su — Mesa, AZ 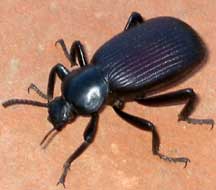 Hi Su,
Let’s start with the Beetle. This is a member of the Family of Darkling Beetles, Tenebrionidae, genus Eleodes which are known as Stink Beetles. According to Hogue they are “smooth shiny black beetles. … They are medium to large (1 to 1 1/4 in.) and their wing covers are fused along the midline making it impossible for them to fly. These conspicuous beetles are usually encountered as they amble along the ground. Individuals may also be found under stones and loose tree bark, where the long cylindrical larvae also live. … When a Stink Beetle is disturbed or its wandering is interrupted, it stand on its head and points it rear end into the air. For thi headstanding habit, these insects are sometimes called ‘Acrobat Beetles.’ Adults may emit a disagreeable though weak odor when handled.”