stinger
Hi there. My wife won’t squash most bugs; she captures the critters and tosses them outside. Yesterday she thought she was saving a crane fly, but when she cupped it in her hand, whatever it was gave her a nice sting. Later in the day I found it and took its picture. Unfortunately, the process seems to have sent it to its final reward. I’m attaching the mugshots. Can you identify it? Thanks.
Russ
Topanga, CA 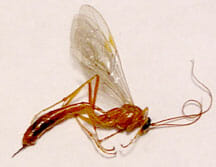 Hi Russ,
We thought this looked like an Ichneumon, but had never heard of them stinging. So, we wrote to Eric Eaton and he wrote back with this surprising reply: “Yes to both! It IS an ichneumon, probably in the Ophionini tribe, and they are among the few ichneumons capable of stinging. I had been under the impression that NO ichneumons could sting, but that is WRONG. Some apparently paralyze their host caterpillars long enough to drive an egg into them. Goes to show that I’m still learning basic information myself. Eric”