Subject: Almost killed me. Island of Utila
Location: Isla de Utila, Honduras,
October 7, 2013 10:39 am
Hi! This caterpillar almost killed me. I’ve never been allergic to anything, but the poison (acid/whatever) that this thing secretes sent me into anaphylactic shock. We live on the island of Utila in the Caribbean 22 miles north of the Honduran mainland. This bugger fell on me and attached itself to my shirt, then to my skin. It had to be ”ripped off” of my skin where it was sticking to me through my shirt. Intense pain, despite massive pain killers at the clinic, abated only after 18 hours when the swelling burst releasing about a cup of fluid. We have tried to ”find” this thing online and the closest we’ve come to is an Automeris io (Fabricius) , but his guy has little javelin like spears along its side at the bottom. ”Old Islanders” here say it can kill a child, but is seldom seen and only after large storms that come from the north. Any ideas on this caterpillar or can you direct us to somewhere else that might have mor e on them, please and thank you?
Signature: Tony OnUtila

Dear Tony,
Thanks for sending us your photos and location.  We believe you have correctly identified the genus Automeris for this stinging caterpillar and it does resemble the Caterpillar of the North American Io Moth, but there are many tropical species.  We will contact Bill Oehlke to try to determine the species.  This genus is well known for the stinging capabilities of the caterpillars, but your reaction sounds extreme and you are probably correct that there was an allergic reaction to the sting.

What you have identified as fangs are actually spines and it appears the final pair of prolegs are grasping the pen in the photo. 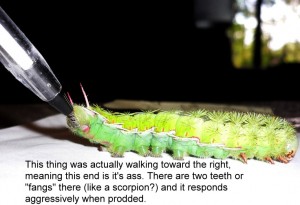 Good Morning Daniel,
Thank you kindly for responding to our e-mail regarding the (almost) killer caterpillar; it is greatly appreciated, especially in light of your limited time to address such inquiries.
I, too, have to assume that the reaction I had was a severe allergic one. That swelling that is evident in the photo continued for hours and resembled the top half of a loaf of bread before it finally burst. For the sake of information, The Lovely Jo had me pop a benadryl tablet immediately and that is what allowed to me make it to the clinic where I was treated for about 3 hours before being released to return to my home. (after the swelling in my throat was diminished and the medications were in force).
Those little javelin/spear/spiky things along the bottom of the killer caterpillar are what most confused us as to an accurate identification, and we appreciate that you have additional resources that you can go to for further information. With our storm season upon us, we could conceivably see these things again.
As a note to file, our gardener had one of these fall on him a couple of days after my unfortunate episode (from the same palm tree by the pool in my front yard) and he also had a reaction. Not nearly as bad as the one I had, but it was on his arm for only seconds, as opposed to the over a minute that one was on my back/side.
This is one killer caterpillar…
Again, thank you for your time and we appreciate all of the information that you can share with us. We pass it on here on the island so that we can all be aware.
Kindest Regards,
TonyP

Hi Tony,
Bill Oehlke provided us with the following identification.