Subject: Request for Identification of Mystery Australian Stick insect
Location: Mount Gambier, South Australia, Australia
March 3, 2017 1:46 am
Hello!
I found recently found some mystery phasmids while out doing conservation and land management work, and i would love to try and get a positive ID on them. Ive tried finding information on the internet about the individuals i found, but most of the information is about the larger ‘pet’ Australian species.
The green one was the easiest to photograph, as it stayed still. The smaller brown individuals (who are a different gender judging by genitalia) were much more lively.
The images i included show the green individual, which has a bulkier body, and two thin protrusions at the end. On all the individuals i found, there was no evidence or wings or wing buds (found in nymph stages of other stick insects) so i assume they may be flightless.
With front limbs straight out, the green one was about 11-12cm long total, with about 7cm of that being from head to end of abdomen.
I found these guys on a native grass possibly called “Tussock Grass” (Poa sieberiana or Poa labillardieri) – within close vivacity to Ficinia nodosa (Knotted Club Rush). So they were close to the ground. Others i were working with noticed them on their clothing as we worked in the area, and we assumed they climbed onto us from the grass. Acacia and Shea-oak were also very close by.
Some were observed mating but i didn’t get a chance to see the size of those adults.
I hope all the information i provided helps in identification. For now i will keep them in captivity until tomorrow, where i will probably release them back to the tussock grasses where i found them
I cant seem to attach all the images, so if you need additional images i have them (images of abdomen, close ups of heads, genetalia etc)
Signature: Liam 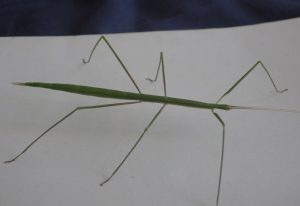 Dear Liam,
We are posting your image in the hopes that one of our readers might be able to assist with a species identification of this Phasmid.  You can try attaching additional images and responding to us.

Here are some other images, but i was already given a positive ID by an australian stick insect breeder. The phasmid is the “Sydney stick insect” Candovia peridromes. 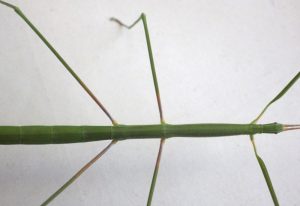 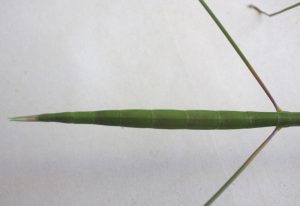