Are you a wasp?
Location: hills in Brea, CA 33°56’53.65”N 117°50’30.08”W
August 1, 2011 4:02 pm
On July 29th, 2011, at Scout Camp, we came across this wasp-like guy crawling in and out of holes. He was fairly non-aggressive as he let us get fairly close before he would chase us away. We’ve seen the little blackish/bluish wasp that dig into the ground before, but these guys were MUCH larger than those wasps and their heads are much bigger. The blue color is striking as well.My son and I love your site! So, we were wondering, is this in the wasp family? The head just didn’t seem like a typical wasp head.
Signature: Ron and Kevin 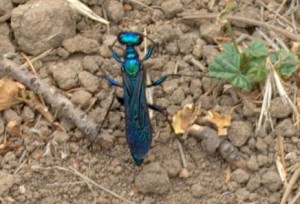 Dear Ron,
The Steel Blue Cricket Hunter, Chlorion aerarium, is indeed a Thread Waisted Wasp in the family Sphecidae.  According to BugGuide:  “Females mass-provision several serial cells, each containing from 2 to 9 nymphs or adults of Gryllus pennsylvanicus. Prey are transported on the ground, venter-up, with the wasp’s mandibles grasping the antennae of the cricket.”  This really is a beautiful wasp. 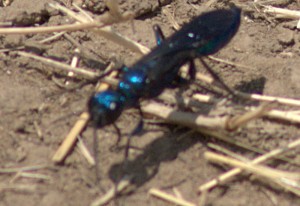 Bug of the Month May 2017: Grass Carrying Wasps found in Home