Subject: Stag Beetle or not?
Location: Michigan
May 29, 2017 8:03 pm
Found one of these guys on my porch and did a little research to try and identify him. Is this a Stag Beetle subspecies? And if so, is it common to see them this far north?
Signature: Suz 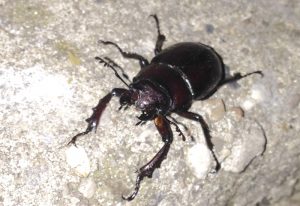 Dear Suz,
We are pretty sure that based on this BugGuide image, your male Stag Beetle is Lucanus placidus.  According to BugGuide:  “Similar to L. capreolus, but much darker, elytra more punctate. Legs dark reddish brown, no light brown patches as in capreolus. Several small teeth on inside of mandibles of male–capreolus has only one.”  Your images do appear to show “several small teeth on the inside of mandibles of male.” 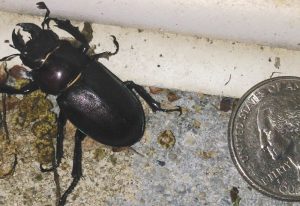 Thanks for your reply! Are these common in Michigan?

We have no information on how common they are.  There might be local population differences depending upon available food and habitat.  Michigan is within the range of sightings recorded on BugGuide’s data page.

Female Stag Beetle, but what species???